Which means, in Australia, that I'm busy as hell- which I'm sure you all are, too, coming up to Christmas!

What's the relevance of this, you ask? Well, today I'm going to talk about using idiomatic language to create authentic character voice.

I did a short course last year on writing dialogue. It's one of my weaknesses, and I felt the need to do something about that. Unfortunately the course was pretty terrible- for one, I was the sole and only student who enrolled. For another, it was aimed at playwrights, and the instructor didn't quite know what to do with a novelist. And lastly, the guy was determined that I had to cut back on my Australianisms, because they just didn't sound right to him.

There are a lot of things I'm prepared to compromise on, but authentic language is not one of them.

I'm writing about English speaking people who lived in the 20th century, but the way country dwellers and soldiers in Western Australia talked between the two World Wars is a long way from the way your average city-dwelling modern English playwright speaks today.

How do I know that? It's a combination of reading widely and doing my research. By reading stories, poems and novels set in the same time period as mine, I get a feeling for the language of the time. By reading diaries, newspaper articles and other historical references from the same time, I get an even stronger understanding of language and common references. Every time I see something mentioned so casually that it doesn't warrant further explanation, I know I'm looking at a piece of cultural information that was well known at the time.

As an illustration, here's a page of Thomas Lockyer's diary on which he uses a little of the Australian language common at the time- 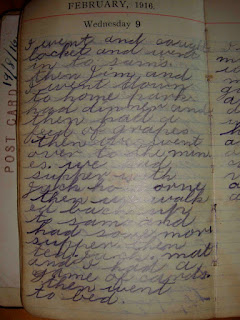 He had a feed (he ate)
He had dinner (lunch) and supper (dinner!)

There are lots more terms that were in common use at the time but are no longer heard- cobber, for example, was something you called your friend (or your mate, as you'd call him both then and now). There was a lot of rhyming slang, which you still hear in the country today but much less commonly in popular culture- your trouble-and-strife, for example, was your wife. And there was a lot of food which, due to drought and tough economic times (not to mention rationing, not to mention a much less privileged view of the world) was common then but not now- mutton, tripe, sweetbreads- today's average 18-year-old (the age Bill is when he goes to war at the start of this story) would probably not even know what those were.

Another interesting factor is that Australia switched over to decimal currency and measurements from imperial in 1966. Before that time, it was all pounds, shillings and pence. These days it's dollars and cents. Measurements were discussed in pounds and ounces, feet and inches and miles, compared to today's kilograms and grams, metres, centimetres and kilometres. Though today's Australian readers might not understand the exact measurement of a quart or a bushel, it would be completely inaccurate for my characters to talk about anything else.

There's also a whole military lingo as used by Tom Lockyer in his diary- falling in, going on parade, and the like. This is just part of the story, but the language has to match.

I believe that no matter what language or accents your characters employ, you need to make them understandable. Get too busy with idiomatic phrases and altered words and you risk limiting your audience only to those who have the same background as your characters (since they're the only people who'll understand what you're on about). But I think that for authentic voice, you have to at least capture the spirit of the language and the time by using idioms, time-specific phrases, and cultural reference points.

I believe this applies whether you're writing historical fiction or contemporary, and tomorrow Jen's going to demonstrate how she does it in her modern story.

Someone once suggested that writing was like painting- you start with a blank canvas; etch in the outlines of the major figures; paint the background, and then the detail. I tend to see writing like that, too- don't worry about getting it dead right the first time. You can always go back and paint in more detail later.
Posted by Claire G at 12/21/2009 07:54:00 AM