You Bring Out The So-So in Me 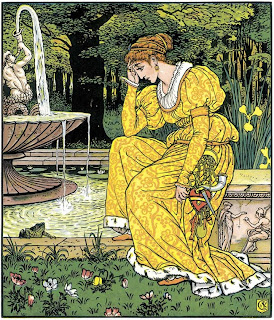 There’s a cartoon in this week’s paper that gave me a chuckle. A man and woman, obviously on a date, are sitting at a table bored with each other. The woman says to the man, “You bring out the so-so in me.”

For most of us, however, characters grow slowly and organically with the unfolding of the story. They’re like a friend we get to know as we spend time with them. Their foibles and noble deeds, their fears and their strengths reveal themselves in time.

We may come to really love our characters as if they’re real people (and indeed, they are, aren’t they?). We spend countless hours with them, placing them in the rich fabric of our imagination, moving them around the scenery and giving them words to speak and emotions to feel. It’s fascinating work and it’s fun, too.

The challenge for a writer is to make our “friends” as interesting to readers as they are to us. If you Google “character development” - as I’m sure most of us have at one time or another - you’ll find countless words of advice, a dizzying array of character questionnaires, check-lists, archetypes, and so forth, all with the reassurances that if you diligently fill-in-the-blanks you’ll have a character. Presto.

Simple, isn’t it? If I know the color of my character’s eyes, what his height and weight are, and how much body hair he has, what his favorite food is, where he went to school, and what his first girlfriend’s name was, I’ve created a memorable character, right?

If I concoct an elaborate backstory for him and figure out what makes him breath, what gives him life, will that make him real to readers? Is a laundry list of physical traits and a suitcase of memories enough to make him spring to life? These things are good to know. I’m not against creating a character profile, especially if knowing them makes you more comfortable. But will knowing these things make for a memorable character for readers?

One of the best bits of advice I read about character development came from Beth, a section leader at the Books and Writer’s Community Forum. She believes there are some very basic steps writers can take to ensure a memorable character, specifically, a character who is real, yet larger than life.

One of those steps is to make sure your character has a past and if possible, a past that influences the present. This is where backstory is important. All of us act and react to our situations in life according to what we’ve known and experienced before. Our characters should do the same.

Another step is to give your character a life off-stage. Give them something to do, make it appear to readers that they’ve got a full life. For instance, in my own story, I started a scene in which my main character arrives home from someplace and sits in his truck, listening to the rain on the roof and contemplating a few things. I never mention where he’s been, only that it’s late, raining and he’s reluctant to leave the truck. Where was he? Why was he out late? Doesn’t matter really, in the scheme of things. He has a life off-stage.

Memorable characters, much like memorable humans, are contradictory, inconsistent, surprising. If your character always acts in the same way, where’s the interest for the reader? Find ways to make your character surprising, give her some whimsy, some inconsistencies, something quirky to keep readers off-guard, amused, or surprised. Alternately, you can give a character depth by making them consider their contradictions, showing the struggle they may have with their inconsistencies.

Real characters feel things deeply. Don’t gloss over their emotions. Find out what your character feels and why, then find a way to reveal those deep-seated feelings to your readers. A word of caution, however, when it comes to emotions. Done badly and you’re bound to cross the line into melodrama.

This next one I love: real characters have secrets. How many of us have tried to wheedle a secret from someone? It’s annoying beyond belief to be left out of the loop, isn’t it? Do the same with your readers - leave them out of the loop, let them dig, wheedle, and obsess over the secret your character has.

And finally, our characters do things we only dream of doing. Whatever that is - could be something small, like baking bread, or something huge like piloting an inter-galactic space pod. It’s our dreams that keep us moving forward.

No matter what kind of character you’re creating: protagonist, antagonist, side-kick, male, female, alien-werewolf-vampire-shapeshifter, give them a life off-stage, dreams, secrets, a history, deep feelings and inconsistencies. They'll much closer to becoming larger-than-life and completely real for your readers.
Posted by Susan Montgomery at 2/18/2011 04:32:00 PM