Negative Space: or The Kama Sutra Beat Me to It 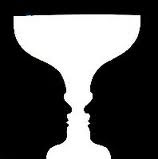 Negative Space. Is it a vase? Or two people facing?

I write romance, ergo, I write about love. Because we all know and crave love, because it is such a known emotion, it can be incredibly hard to show this queen of human sentiment. After all, how does one make what is commonplace feel fresh? More importantly, how many new ways can the act of a kiss or making love be portrayed? Discover new words? Use new and different positions? Hell, the Kama Sutra took care of that centuries ago. So what to do?

Lately, I’ve been thinking about negative space. In general, it’s an art term. You have the subject of your painting, let’s say, a female nude. The negative space would be everything in the portrait that surrounds the woman. The space between her thighs, under the curve or her waist, that is negative space. An artist’s eye can become lazy. She sees the object, usually a familiar thing, and thus paints the object. But what if instead, she trains her eye to look at the painting, the entire scene as a whole? Suddenly it isn’t simply a nude female before her but an assemblage of shapes, both the figure and the space around the figure. Suddenly the artist sees the scene in a new light. A depth and freshness can be found that she never knew existed, simply by taking the negative space into account.

How does that work for the writer? A scene isn’t simply composed of what is there but also by what isn’t there. We have dialogue, action and description. They create a world on a page. But we want these characters to feel real. In real life, our world revolves as much around what we don’t do and say as on what we reveal to others. Sure you can use interior monologue to convey this but what about the fact that we as people often go through life largely unaware of our…let’s say, personal foibles? What about the times when we act without thinking?

But I’m going to backpedal to the issue of love. In real life, more so than in fiction, we express our love in subtle ways. We aren’t all poets. We don’t usually go for grand gestures. My husband shows his love for me every day, simply by being there, by trying to help anyway he can, by placing his hand upon my hip when we drift off to sleep. Of course, part of what makes fiction so gratifying is that the characters act out all the grand gestures that we don’t. However, when it comes to romance in stories, these grand gestures have been done so many times that they’ve become common. Which is why I return to the notion of negative space.

In this time of outward emotion and heavy displays of affection, paying what isn’t obvious can intensify sexual tension. So in a love scene, it becomes not so much about the mechanics but the space around what your couple is doing. Let’s say, they’re getting down and dirty. There are only so many ways of saying that. *Cough* One can thrust, plunge, pump, etc. But in the midst of this plunging and pumping, your hero tenderly stokes away a strand of hair sticking to the heroine’s cheek. Like that, the hero’s tender feelings come out in a way that sticking to the mechanics of a scene would not convey, no matter how many terms you use. Perhaps it is at the moment of a kiss. There is heat and heavy breathing, and just one moment of at last that weakens a heroine’s knees and lets us know more than the act of kissing itself, that this means so much more than kissing.

Which leads us to the more subtle instances of love. Are there parts to your story in which your characters don’t act outwardly lustful, loving, needy but it is obvious that this is what they are feeling? Does the hero protect or comfort the heroine without thinking of what it will do for him? Do they betray their inner feelings by NOT acting? This restraint, the evolution of selfless giving can make those moments when they do act so much more intense because we readers are dying for it. We’ve been teased, anticipation has grown. This is foreplay in the form of plotting.

In a way, negative space in terms of novel crafting is foreplay. It is highlighting those other areas to increase anticipation and ratchet up the tension so that when you do zero in on the main objective, that being the specific action/dialogue that propels the plot, the reader is fully engaged. Clear as mud? (g)