Do you see the past in colour, or in black and white? For me, it blazes brightly.

When I look at history, different times for me have a different feel to them; a different and distinct personality. It's not a particularly scientific thing, being able to identify how the past feels- partly it comes back to my archaeology background, which makes me think about people, places, and material culture as living and breathing, no matter whether they're no more. 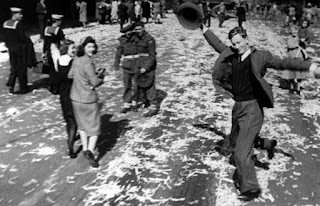 Part of it, though, comes back to the books I've read over time. Hundreds and thousands of books have been absorbed into my brain, and all of them, good, bad and indifferent, have left a little subconscious mark there. The ones with historical settings in particular tend to add puzzle pieces to the bigger picture, the depth of sense, the feeling of what it was like to live in those times.

As an author of historical fiction, being able to capture this essence of place and time is one of the most important aspects of the writing process. So how do you do it? And more importantly, how do you do it well?

My first answer to this will always be research. After that, depicting the setting is up to you.

When I started BETWEEN THE LINES, I kicked off with what is now the second book, set in London during the 1940 Blitz. Reading the bare facts is important, but it only gives one part of the impression. And bare facts are for history books- but history books are an important place to start. I devoured dozens of them.

From history books, you get dates, times, places, turning points in history- the bigger picture.

Another important source is the biographical and autobiographical stories from that time. For WWII London, it doesn't get much better than the BBC's People's War website, which is a massive collection of individual stories about living through the war. These stories start to unravel what the history books can't completely capture- the keep on keeping on spirit that bubbled on beneath Blitz London, no matter what.

From true stories and first-hand accounts, you find attitudes and memories, thoughts and feelings, hopes and dreams, fear and devastation. 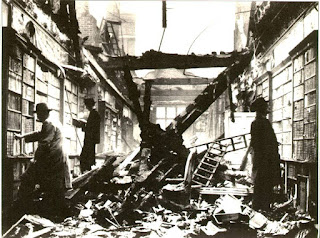 Chaps in Blitz London browse the library of the bombed Harris House
I love to read historic newspapers from the time period in which my story is set. Not possible for every historical author, but my 1914 to 1941 time period gives me that benefit. So does Australia's incredible National Library of Australia digitised newspaper collection. I can sit down and read the Saturday papers that my characters read in 1912, and get a sense of the way things were before the war. I can see what clothes were in fashion in what season, and read up on recipes for tuna in aspic, or blancmange.

From newspapers, you come to know the pulse of a place, the things that mattered enough to be reported. The language of the time, unadulterated by interpretation.

A letter to an Aussie newspaper in 1897 describing local lingo- click to enlarge!
(source)
Another amazing resource I've been able to tap into is the National Archives of Australia's online war records, in which you can read the digitised record of every Australian soldier who fought in the First World War. When and where they enlisted, when, where and how they fell in battle. Who got the telegram to say they were gone- wife, mother, sister, father.

From official records, you find surprising small details about individual lives- a birthmark on the right shoulder; no family left alive to inform of an untimely death. 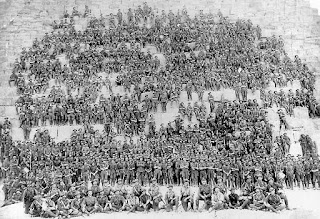 And lastly, there's no substitute for actually going to the place you're writing about, and absorbing it a little. I've been to London twice for Blitz research, and I'm intimately acquainted with all of my Western Australian settings. It's not possible for everyone, unfortunately- that's what imagination is for, and all the above. But it's definitely worth doing if you ever get the chance!

All of these things, all these hours of digging, reading, researching, combine in my head like a patchwork of people, places, events, until the whole background blanket feels complete and real. I can settle into it and look around. I know how people get around, what they wear, what they eat, how they swear when they're frustrated. I know how they feel about the drought, the war, the Aboriginal people who live just outside town.

All these things give me the personality of my characters, but also of place. Western Australia in 1914, where BETWEEN THE LINES was set, had as unique a personality as anywhere. From a stubborn, slow-to-start colony on the coast of a harsh land, the state began to boom in the last part of the 19th century as gold was discovered further afield. The resulting boom enriched everyone, everywhere- the buildings from that time, which I can check in the Post Office directory, were big, grand, and ostentatious. Buoyed by success, people decided to seek a different kind of fortune out on the land, raising sheep and wheat- the backbone of the original colony, just further afield. 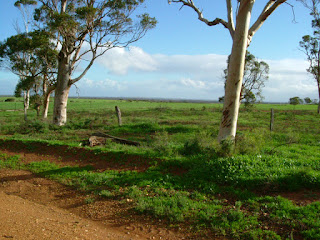 Western Australian sheep farm with ghost gums
It's these people who populate my story. Stubborn as rocks, determined to make a go of it. Simple in their desires, their opinions, their ideas. Believers in Australia, the Lucky Country, and in their connection to the King of England. Young, strong, cocky, brash and full of wry humour. These are the men who went away to war.

These are the men who never came back, or came back changed forever.

And this is the key to embodying that past personality in your historical story: the characters carry it in everything they do, think and say. Everything you've researched and learned thrives in the background through your descriptive prose, and through the plot events. But the characters, both primary and secondary, are the real spirit of the thing. They live, breathe, act and react, and through them, history has a heartbeat.
Posted by Claire G at 2/24/2011 02:13:00 AM