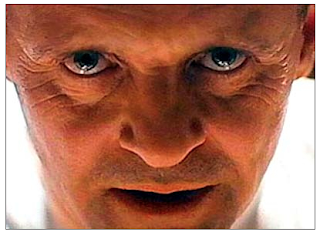 Last week I blogged about how I’m embarking on a self-taught “suspense 101” course, reading and breaking down novels of suspense so I can – hopefully- nail the genre better than I currently have in my SFD.

Suspense, on the other hand, is more about the “why dunnit”. The identity of the villain is known, and we get multiple POVs, including the villain’s. Think Hannibal Lecter in Thomas Harris'"Silence of the Lambs"; and think of Harris' “Red Dragon”, where we get a very intimate look into the mind of one of the creepiest literary villains I know, the serial killer Francis Dolarhyde. Part of what keeps the reader turning the pages of these books is definitely the need to discover why these villains are so warped.

Of course, various aspects of thrillers and mysteries and suspense do bleed over into each other in many books, but these are the general delineations of the genres.

I’m pleased to say I at least tick these basic boxes of suspense with my WIP. But having the right basic structure is no way near enough. With a novel of suspense, the story has to be told … well, suspensefully. The book must convey a tone of dread and malignity; there has to be something – or many things – dreadfully wrong in the characters’ world. And how best to achieve this is what I’ve been looking at in my book breakdowns.

Set the tone from the start.

Setting a tone of suspense, and telling your reader what they’re supposed to be terrified of, is a must.

The prologue of Lisa Unger’s “Black Out” does this extremely well, starting with the first line: “Today something interesting happened. I died.”

Then, in just two and a half pages, we get the big picture: she’s on a cargo ship, surrounded by men hired to protect her, fleeing from a man she thinks of as “her predator”, who is fast gaining on her. Tension from the very start. But Unger doesn’t leave it there. Her main character is contemplating jumping off the boat; for her, suicide is a more welcome end than being caught by this predator. The tension ratchets up. And then, she thinks of her young daughter, and makes the decision to stand and fight, to stay alive, for her child. There’s going to be a show down.

This prologue does a lot of work in a short space. It tells us who we should be scared of, and what the core of this story will be about - a woman’s fight to stay alive. It also sets up a world in which the main character’s life has gone very wrong, and leaves us sharing her sense of dread. Coupled with the promise of a showdown, this prologue creates a lot of suspense.

Keep the reader off balance.

Giving us the sensation of sand shifting beneath our feet, of things possibly not being what they seem, also creates a ton of suspense, and one way this is achieved is to raise questions in the reader’s mind … then delay answering them.

In the example of Unger’s prologue, the main character mentions she was once scared of water. Nothing more is said about this, and how the fact is important to the story, until much later. Bill Floyd’s “The Killer’s Wife” opens with the main character doing her grocery shopping at midnight, her favourite time to shop because it means she can avoid people … exactly why she wants to be left alone is not immediately revealed. And in "Red Dragon", the reason the killer uses his grandmother’s false teeth when committing his crimes is not answered until quite a way into the book.

Another way to keep the reader off balance is to let them in on things the main character doesn’t know. In Kate Mosse’s “Sepulchre”, for example, the main character, Leonie, is being stalked by a deranged killer. We get to see the killer following her trail, drawing ever closer to her … and all the time Leonie is totally unaware of what’s coming.

Mundane settings can disarm a reader, get their defences down nice and low, before springing the trap. The first chapters of “Black Out” and “The Killer’s Wife” both take place in supermarkets, for example. And water is often used to lull us into a false sense of security right before something terrible happens – think Janet Leigh taking that infamous shower in Psycho. Come to think of it, the same goes for sex – how many times does the bad guy bust in just as the hero and heroine are getting romantic?

Have high stakes and keep raising them.

Unger’s stakes are high – the protagonist’s life, and the life of her child. The stakes in "Red Dragon" are the lives of the whole families that Dolarhyde murders in their own homes. High stakes, which both authors continue to build on through the book.

Have a ticking clock

Writing is all the more suspenseful if there is immediacy to the danger faced by the protagonist, if there is a countdown the protagonist must run against. In "Red Dragon", for example, the fact the villain kills on lunar cycles is investigator Will Graham’s ticking clock. For Clarice Starling in "Silence of the Lambs", the ticking clock is the knowledge that Buffalo Bill only ever holds his victims for three days.

Have characters lie to your protagonist. We’ll all know it’s a fib, but the protagonist won’t – what will happen when they discover the truth?

Cut a scene in the middle of the action and change location, or POV, or both. We’ll be flipping those pages to find out what happens next.

The door creaking open in the dark, the protagonist crouched behind the door, convinced it’s the killer … when it’s only the landlord come to change the blow light bulb.

And I could go on … but I’m interested in hearing from you. What suspense creating techniques do you use, or think work well? It’s something to think about, because bottom line, every story, suspense or otherwise, really should create a yearning in the reader to discover what happens next, if the story is to be a great one.