This week it was my turn to lose track of the days due to a Monday public holiday, and I very nearly missed posting today. Strangely, panic doesn’t seem to help when scrounging for topics at the very last second, so I gave up hyperventilating and recruited a guest blogger to save my bacon – my eleven year old son. He did have one condition, however – that, for the sake of anonymity (and to avoid the shame of being associated with his mother’s dorky blog, quote/unquote) he be referred to here as … “Cheesemonkey.”

(I blame his father. For everything.)

Cheesemonkey reads books like he breaths air, so I asked him to blog about the books he adores; I simply typed as he spouted on. So, if you have an eleven year old lad you’re looking to buy a book for, read on … and over to you, Cheesemonkey (I should SO call him that when we’re out in public: like in the ten-deep line at McDonalds - “Hey Cheesemonkey, do you want fries with your burger?” Heh. That’d learn him.)

LEVIATHAN by Scott Westerfeld is a book with lots of action and a good story line full of creativity. It’s set during WWI, but the technology is much more advanced than it really was. The Allies use fabricated animals for weapons, and the Germans and all their henchmen fight with massive walking machines. There are two main characters. One of them is Aleksander Ferdinand, heir to the Austro-Hungarian throne. He is declared a threat to the throne and runs away with a band of loyal men and a walking machine, trying to escape to the Swiss Alps. The other main character is Derryn Sharp, a girl passing herself off as a boy to get into the air force so she can pilot flying air beasts against the Germans. Their stories intertwine in an amazing turn of events.

THE GRAVEYARD BOOK by Neil Gaiman is about a young boy named “Nobody” Owens who would be a completely normal boy if not for the fact he is being raised by ghosts, in a graveyard. He goes on amazing adventures in the graveyard, discovering its ancient history and many amazing characters such as the Witch Ghost, ghouls and the Dreadful Sleer. However, he is not allowed out of the graveyard because the man who murdered his whole family is still trying to murder him.

CONSPIRACY 365 is a cool series. It’s about a fifteen year old boy called Callum Ormond whose father was killed by an unknown disease. On New Years Eve a crazy man tells Callum that someone created the disease on purpose to kill his father; and also tells him he must survive the next 365 days. He’s thrown into a life on the run as the government and various agents try to capture him when he’s framed for a crime he didn’t commit. A fast paced book with excellent action. This is part one of an entire series with one book coming out every month this year.

And then my nine-year old son walked past and wanted a couple of his favourites to be included: so, without further ado, I introduce Cheesemonkey’s guest co-blogger, “Henry Blah-Blah” (good grief):-

THE BIG BOOK OF TASHI is cool. It’s a whole lot of stories about a boy called Tashi. A lot happens in the stories. There’s lots of adventure and fantasy – like dragons, and boots that make you walk really far really quickly. Tashi is brave and smart, and works out how to solve lots of problems for the people in his village, and also fights the evil war lord who everyone hates.

SPIT IT OUT is a book of riddles and jokes. They are massively funny, with cool illustrations, and heaps of the jokes are about wee and poo and vomit. It's so cool. (Yeah, thanks for buying him that book, grandpa; like he needs any encouragement to discuss bodily functions at inappropriate times!)

So, those of you of the YA persuasion, what other books would you recommend I throw at the lads? And what were your favourite reads when you were a kid? 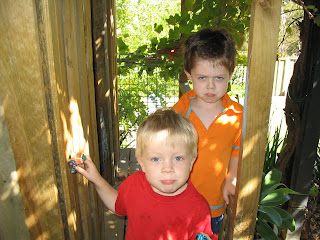