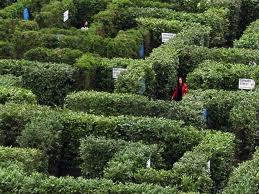 Have you ever been inside a life-sized maze? You know the ones that are created in corn fields, hay fields and even pineapple fields? The maze craze isn’t new, but they continue to be popular with people who enjoy a good puzzle. (Or have secret fantasies of being a large lab rat…)

There are times when I navigate my work-in-progress that I can’t see the book for the words in it. It feels like a giant maze. The beginning is an elusive thing, the middle is full of chunks and the ending — well, I didn’t have one of those until recently. I wander the maze, exploring new avenues, studying the walls for directional clues and sometimes bumping up against a dead-end. It’s a maze of my own making and I stand with the people who enjoy a good puzzle and refuse to think of myself as a giant lab rat.

Even though I love a good puzzle and I take great pleasure in playing inside this maze, I was stuck going down the same worn paths over and over. I saw the same turns, the same twists, but never came to the end. It wasn’t until I went down a new path that I found the ending to my novel.

The revelation was sweetly simple, utterly perfect and in keeping with my main character. It’s the only ending possible and I can’t believe I didn’t see it before. How could I have been so lost for so long when the ending was there all along?

Some of you are probably brilliant strategists and plotters and born story-tellers. Then there’s the rest of us who puzzle things out. If you’re one of the latter and you’re stuck running the maze, I challenge you to jump the walls, knock over the fences or at least peek around a corner you’ve refused to turn.

If you’ve been following Claire’s story, Between the Lines, you’ll know that she recently overhauled one of her characters with brilliant results. Her willingness to let go and re-do has reaped numerous new ideas, stronger story lines, and a huge burst of writer’s energy.

My own work has also seen some of the same effects once I was willing to make a few changes in a character. Suddenly I had not only an ending, but nearly everything that leads to it. (Alas, the opening is still elusive.)