Something in his walk 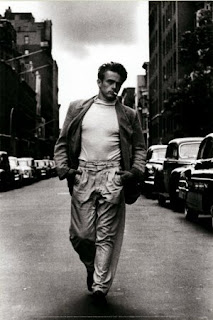 James Dean struts his distinctive stuff
I was sitting at the train station tonight waiting to pick my husband up from work, as I do every night, and as I sat there tapping my fingers in time to the song on the radio, I slowly became conscious that I was doing the same thing I always do- watching the stream of people pouring out of the gates and into the carpark, craning my neck for that first glance of him.

Before he gets close enough for me to see him, even when he's still a distant figure crossing the pedestrian bridge, walking above a stream of head-lit evening traffic, I recognise him. More than that, I see a dozen other men who fit his description- tall, wearing a suit, dark-haired- and I know at first glance that none of them are the person I seek.

It's not just me who can spot him from afar. Our toddler daughter can see him coming from a mile off, too.

So, how is it that we can identify him amidst a crowd full of others who look very similar?

I realised tonight that it's a combination of things I'm looking for- the way he carries himself, straight-backed; the way he walks, not needing to rush because the length of his legs takes him far with every step; the particular quirk of his haircut, the way the front stands up a little after a long day at work. It's also all the things other people do that he doesn't- one man tonight who was an otherwise close match kept reaching up to scratch his head as he hurried along. Another pushed between fellow travellers in his effort to reach the front of the pack fastest.

You know I'm getting to the relevant part of this soon, right? Because this is an important lesson for writers of fiction, too. Not that you'll necessarily have loads of opportunities to show your main character in a crowd, from a distance, but you'll need to make them stand out on the page nonetheless.

What small quirks make your characters recognisable to your readers, and different enough that they're memorable? And more importantly, have you made sure those quirks part and parcel of their personality? Do they mean something? It's not the uniqueness of the trait that makes it stand out- it's making sure that it's all part of a complex and complete character.

An example from above- my husband is 6'4", and his long legs can be hard to keep up with since they set a good pace. But that's not the only reason he doesn't need to rush when he's getting off the train- it's also in his personality to be measured and careful, and he's very rarely flustered or hurried. If he were a character in a novel, that whole bundle of physical and personality traits would speak volumes about him.

Do your characters walk or stand in certain ways? Do they rub a hand through their hair when they're under stress, or bite a thumbnail? Do they laugh out loud at random thoughts throughout their day, or frown unconsciously as they go about serious business? Do they squint up at rainclouds, check their watch habitually, tuck a stray hair behind their ear, fix their lipstick in the rear-view mirror?

These are all things that can be overused by writers, but if you get it just right- like salt, a pinch, not a tablespoon- you'll add a distinctive flavour that will allow your readers to feel like they know your characters personally, so well that they could pick them from a crowd.
Posted by Claire G at 5/19/2011 07:50:00 AM