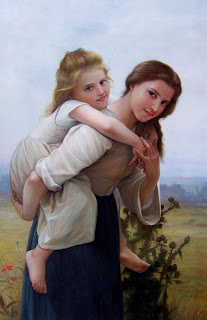 The Piggyback Ride, by William Bouguereau

All this talk of teen reading habits and the books that have influenced our writing has me thinking back fondly to those early, clumsy attempts at writing fiction.

It has also been on my mind recently as I watch a young friend of mine starting out on this magical journey for herself. Like the rest of us, she’s a reader and I don’t think I’ve ever seen her without something to read. Lately, however, the books have been replaced by notebooks filled with her scrawling handwriting.

When she discovered that I wrote fiction it was as if she’d discovered a kindred spirit. And we are, though I’m much farther along the writing journey than she is. We share the common writer’s drive, that indefinable something within that urges us to put words on paper. Maybe she thought she was alone in this feeling, or maybe she thought it was an odd thing to want to do, considering most teenage avocations lean toward fitting in, being one of the crowd, and writers are not typically crowd-seeking. She now knows scribbling in notebooks is a legitimate activity. She’s found a fellow writer and is delighted with her discovery.

When I was her age (about 14) I shared my writing with exactly one other person, a trusted friend who lived across the street. She and I often wove stories together - orally, not written - but as an extension of that, I began to write them down. It never occurred to me to share these with my mom or a teacher or any other person. In fact, I’d have been mortified. (Not that the content was anything but PG.) No, I was just intensely private about my writing. Still am, for the most part, though I’ve learned to share for the value of feedback.

My young friend, though, has absolutely no qualms about sharing her own fiction. Like an eager young pup she nearly leaped around my feet in her joy at finding another writer. Would I read her stories? Would I give her advice? Would I edit something of hers when she was done? Her questions bounded around us, tangled in a string of explanations of just how many notebooks (nine) she has and how many of those are only half-finished stories. (Ah! She’s the kind of writer who has to start a new story just as soon as the idea comes to her…)

Yes, I said, I would read something of hers. Pick ONE for me to look at. This seems to have spurred her into finishing one. She assures me it will be done in a few weeks. Then the ball is in my court and I must think carefully of how to proceed from here, for while I’ve given critiques to fellow writers, I don’t think I’ve been given this much trust by any of them. The responsibility of nurturing a brand new writer, such a young, impressionable one, and of being her mentor, weighs heavily on me.

Over the years I was encouraged enough by teachers (both creative writing ones and just those who read my essays and book reports) to know that I was good at this craft. I believe wholeheartedly that without encouragement and without mentors, this part of me would be left unexplored and I thank God for those wise souls who crossed my path at critical, influential times in my life.

What advice do you give a young writer? How much gentle correction vs unadulterated praise do you give?

Do you remember the advice you received when you started out? What kept you going, who boosted your morale and stoked the writing fires within you? If you’ve got wisdom to share, please help me out as I come full circle in the writer’s life and begin to nurture a young writer.
Posted by Susan Montgomery at 12/02/2011 02:34:00 PM