I was sorting through photos on the family iPad yesterday, rolling my eyes a little at how long it took me to get through and delete the 40 duplicates of each Photo Booth picture my three-year-old daughter takes. If it looks good once, you've just gotta keep snapping it, over and over and over. Oh my.


In the process, I found myself smiling (as I often do) at her creativity. The imagination at three is just so unfettered. Everything is so new. Ideas are happening in that little head for the Very First Time EVER. It's a pretty remarkable time in your life, to suddenly understand that YOU can create and invent and control. Why wouldn't you go nuts with the crazy self-portraits and the inventive colouring schemes? 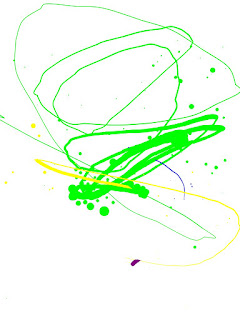 It got me thinking about the way I try to control my own creativity. If my daughter and I are playing our Play School game together and it's my turn, I'll produce something neat, tidy and orderly. It tells a story, and I know exactly what story I want it to tell. I don't want unexpected extras, I don't want stuff that doesn't fit. I set out to say what I want to say, and when I'm done I edit it further. Below you can see my excellent story about the fateful day two jellyfish went out for a swim, and happened across two hungry sharks. It's an award-winner in the making, I assure you. Very heart-rending stuff (click on any of the below pics to appreciate the full majesty). 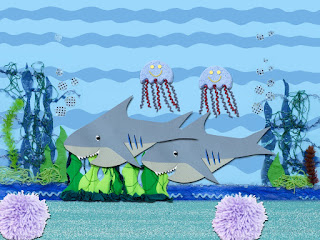 My daughter, on the other hand, isn't interested in neat and orderly. She wants chaos. She wants three Big Teds and a random fish. She wants so many guys in the story that you literally can't move one without moving another.

She wants a bright red cake covered in spiders, or a snappy green and brown number with ladybugs, several keeling-over bridegrooms and a few rubber ducks (you really want to enlarge that green cake- it's a corker). 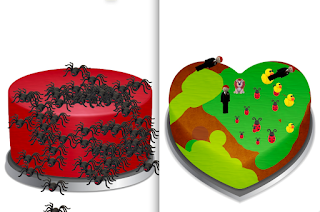 Why? She doesn't know until she gets there, but the fun for her is in the process. Whereas the fun for *me* is in seeing my ideas take shape in a meaningful way.

And you know, we're both right in the way we approach things for our respective stages of life, and particularly as far as my writing is concerned. I think you need to have a delicate balance between unfettered, joyful creativity, and careful consideration when you sit down to write a novel. You want times when you can throw it all to the wind and just see what happens, but at the same time you need a certain level of self-editing at all stages of the process, or else you end up with forty of the same picture and no idea what that second boat is doing there (I would have known before I put it there, if it were me- she'd be excited to see what her imagination suggested after the fact). 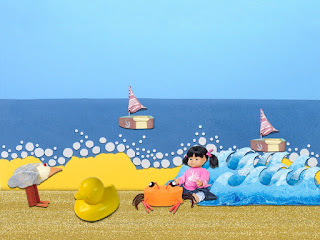 I find it fascinating to see the differences between us, but also how much enjoyment we each get out of our stage of the creative process.

So, for me, I think it's a combination of letting your inner three-year-old run wild, and consolidating all you've learned over the many years.


By the way, if you like the look of the Play School application, it's brilliant for creative kids, and it's absolutely free. They get to make their own pictures by dragging in different characters and props, then they can make and voice movies out of the same stuff. Find it here.
Posted by Claire G at 3/12/2012 07:16:00 AM