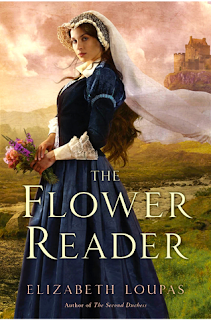 In 2011 Elizabeth Loupas gave us her debut novel, The Second Duchess, a book I thoroughly enjoyed (my “20 Questions With Elizabeth Loupas” interview is here). I’ve been eagerly awaiting her second offering ever since and it finally arrived last week when I was lucky enough to receive a review copy of The Flower Reader; and after consuming the book in just two days, I can safely say The Flower Reader is well worth the wait.

Set during the early reign of Mary, queen of Scots (newly returned from France to rule upon the death of her mother, Mary of Guise, queen regent of Scotland) The Flower Reader is a sweeping tale of murder, mystery and the web of conspiracy that ensnares its heroine, a young Scots noblewoman named Rinette Leslie.

On her deathbed, Mary of Guise entrusts Rinette with a silver casket, asking her to keep it and its contents hidden until it can be placed in the hands of her daughter, the new queen. Rinette, a passionate, headstrong young woman, is known to have the ancient gift of divining the future through the art of floromancy, and thus manages to smuggle the casket’s secrets from the dead queen’s chambers hidden beneath the flowers she uses in her mystical craft.

As the new queen makes her way to Scotland, the treacherously divided Scottish nobility jostle for power; Rinette, heiress to the Granmuir estates, finds herself a pawn fought over by male protectors eager to gain control of her inheritance and she only narrowly escapes a forced marriage, instead marrying Alexander Gordon, the golden youth she has loved since she was a child. When Mary finally arrives at court Rinette is determined to meet her and hand over the silver casket to fulfill her promise to the old queen, then return to peacefully live out her days with Alexander at her beloved Granmuir.

But Mary refuses Rinette’s initial request for an audience; chagrined and forced to bide her time, Rinette decides to hide the casket. But before she can ever deliver it to Mary, murder most foul turns Rinette’s life upside down and she finds herself alone, threatened, and with her knowledge of the casket’s whereabouts her only guarantee of safety. For the casket is rumoured to contain predictions by none other than Nostradamus, plus the darkest secrets of every Scots nobleman, meticulously gathered by the old queen for her daughter; powerful weapons indeed, sought by both Mary and the Scots lords, and the ruthless agents of the many royal houses of Europe who to seek to claim them.

Murder and conspiracy abound, and assassins lurk round every corner as Rinette navigates the maze of lies and deception that is the Scots court, trying to separate friend from foe in her quest to use the silver casket to ensure her own safety and that of her family.

This is an exciting, fast paced read. I found myself holding my breath for Rinette through much of the book, for whenever it seemed things could not get any worse for her, they do … especially in the shape of one Rannoch Hamilton. I won’t give anything away here, but I think I may have found my new favourite villain; he very successfully made my skin crawl!

But Rinette is no damsel in distress. She is level headed and able to quite adeptly extricate herself from many a tight spot. And she is also a romantic. Her first relationship with Alexander is tarnished by a betrayal, and the great question is whether she will let herself love again when the chance is offered by Nicolas de Clerac, the man who repeatedly saves her and in whom she comes to trust. The trouble is, Nico is also enmeshed in the many plots to wrest the silver casket from Rinette, and has secrets he cannot reveal to her.

Mary, queen of Scots, is delightfully drawn in this tale, too: sexy, beguiling, a woman at the height of her powers with just a glimpse of Lord Darnley and the chaos his influence over the queen will ultimately bring. Indeed, Loupas effortlessly brings to life the intrigues and machinations of Mary’s court, and evokes the period wonderfully with her rich depictions of court masques, weddings and balls. I also enjoyed the floromancy element to the story, and found the floral imagery quite beautiful.

The suspense builds steadily, the stakes climb forever higher until finally this clever murder mystery ends with a very satisfying conclusion.  Go forth and buy this book – I highly recommend it!