Yes, I am back! Your girl Tuesday is a little late again, tho. It's Thursday (early Thursday at that), and I'm just now sitting down to blog for the week. Sorry 'bout that!

So, how was Colorado?

I WANT TO GO BACK!

Don't believe me? Check out these pics: 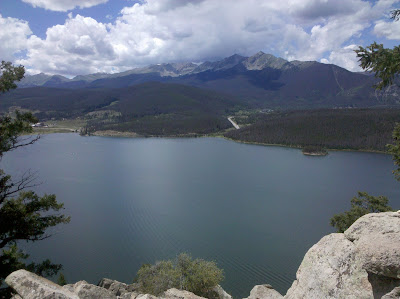 A view from Sapphire Point -- overlooking Lake Dillon, CO, just between Breckenridge and Frisco. Oh man, look at that view!!


Another shot from Sapphire Point. Sigh! 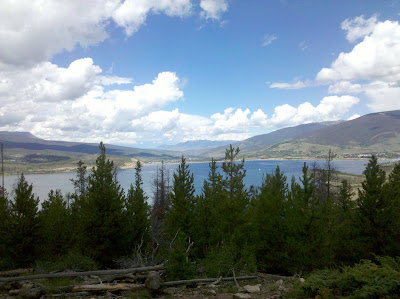 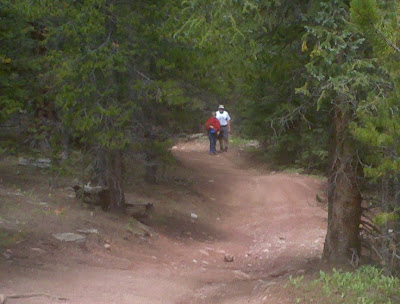 A shot of my aunt and her husband on the path up to Dyersville. Let me tell you... that looks like a fairly easy incline, but when you're a flatlander like me, it feels like you're scaling the side of Mt. Everest. I was sucking up the oxygen like they wouldn't make any more. I call this photo, "The Stragglers." Just glad I wasn't one of them. 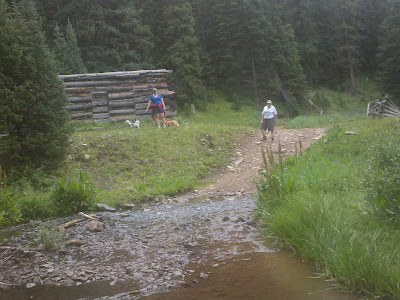 The final destination. The big city of Dyersville! Umm, yeah, so it amounted to one partially erect cabin and a few ruins, but whatever! It was a miracle we got there, a miracle that we got across that small stream completely dry, skin intact (tho the uncle didn't fair so well on the return trip), and we had a great time! The pups were especially excited to go tromping through the stream.

Wish I had more pics to share, but half the time I forgot all about my camera in favor of soaking up the scenery. If you haven't been out that way, You Need To Go.

Now... being as this is a writer's blog, I thought I would share a little tale. It's one of adventure...danger...and...Texans?

A Rafting Tale by Jen Hendren

I've been rafting before--once. I had a great time, but I'll admit the thought of doing it again was a bit nerve-wracking. The first time, I rafted down Brown's Canyon, which is rated at a level 3. A basic beginner course. This time, we decided to do The Royal Gorge, which is a level 4/5, depending on the water levels, etc. Let's just say that a level 6 is considered off limits, and a level 4/5 requires you to wear a helmet, whereas a level 3 does not.

In short, my chances of taking a plunge into the drink increased expontentially with the decision to "bump it up a level."

Yeah, I'm kind of an idiot.

Anyway, I was very relieved to find out that the river (the Arkansas, for those of you who are curious) was running at a level 4. Whooo...TWO levels SCARY. ONE Not So Bad. I could do this. I'm a pro after all...with many, many experiences under my belt. (Snrk)

So, we get to the rafting location, which was a two hour drive from Breck. As we got closer, btw, the knots in my stomach started getting tighter and tighter. Will this be the day I die?? Will I fall out and drown? Get sucked under some rocks...hit my head...get smashed against a boulder and lose the use of an important appendage?? (They're ALL important to me, by the way. Just sayin'.)

We get geared up. If you've never been, they use some serious equipment when you hit level 4. The life jacket they put you in is like a noodle on a poodle. You can forget about taking a deep breath with one of those suckers on, which is so comforting given you might need to take a deep breath should you fall out of the dang raft. (Again, just sayin'.)

With boots, helmet, jacket, and paddle in hand, I was ready to go!

Nothing about rafting is particularly easy. If you do many outdoor activities, you'll know you don't just arrive at a nice, clean location and do your thing. No, outdoor activities are dirty and difficult endeavors. Once we were geared up, they loaded us up on an old yellow school bus -- hey, it has free AC, i.e. those lovely slide down windows that always got stuck open/closed when you needed them to be the exact opposite when you were a kid riding home from school -- and two-by-two we filed in and took our seats.

This... this is when the "safety" talk takes place. In that short 10-15 minute ride, they pump your lil' noggin full of every rafting 'do' and 'don't' imaginable. (Not really -- it's only 10-15 minutes, after all.) But if you aren't scared when you climb aboard that bus, you're scared when you step off of it.

Whooooo boy. They tell you all about how your legs can get sucked under the rocks by the fast-moving current...and how no amount of effort will save you in most cases. (Kick your feet up, people, and point them down river!) They tell you every worst-case scenario -- all the while chuckling amongst themselves. Oh, those devils! My poor little nerves were shot by the time we arrived at the departure point, and those yodels were having a good laugh over it all.

So, you get to the departure point. There, you meet your guide. Some super tan boy scout who doesn't want to get a "real job" because that would mean...yanno, having to put on clothes (Not that I completely object. Some of them were quite easy on the eye.)...and whose ego practically takes up the entire state of Colorado.

We all climbed into our boat -- our guide for this trip was named Billy. He's been guiding rafting trips for something like 22 years. (!!!) Nice enough guy...big ego.

My uncle and I are the only people daring enough to go on this trip, so we were put in a boat with a trio from Texas. When Billy asks for the more experienced rafters to sit up front, my uncle and the male in the trio volunteer. (Henceforth, he shall be known as The Texan.) Their job is to guide the group. They watch each other's timing and the rest of us follow their lead.

Now, this gave me pause. HUGE pause. I'm not experienced by any means, but my uncle in front scared the BLEEP out of me. He's super experienced at this stuff, but he's a bit hard of hearing, and like any male (pardon the gross generalization), he doesn't particularly like to listen to and/or follow directions. Even with my limited time in a raft, I kind of thought I should've been up front. Yeah, yeah, yeah... I know the drill. Me. Woman. Me. Go. In. Back. Me. Be. Quiet.

So... the first few minutes of any rafting trip are REALLY tame. You start at a calm point in the river so the guide can walk you through different paddle strokes that you then spend time practicing. (All the while, the muted roar of the rapids can be heard in the distance. Gulp. Double GULP.)

Billy doesn't hold back the harsh. After our first few strokes, he tells us we all suck. He makes us do the drills over and over until we "get it." In reality, I don't think we got any better. Yeah, I'm bringing the harsh now.

But whether we were ready or not, by golly, the rapids were approachin'.

The heart of this story takes place at what I think was the second rapid. The first biggie... named, of all things, Sunshine. (insert big grin) (For the record, it was previously known as The Caretaker, but they wanted something a little more cheerful. Hence the switch.)

Billy tells us that there's going to be a slight bump when we dip into the rapids. That we all need to lean in to take the brunt of this slight bump and then get right back to the edge of the raft so that we can paddle our patooshes off.

We... yeah, things don't go so smoothly for us.

I swear, when we hit that "slight bump", it looked like the front of the raft buckled inward. In reality, it was just a HUGE wave of water flooding the front. My uncle, who was seated directly in front of me, went flying forward, and I thought for sure he was a goner.

Uncle goes flying forward onto this hands and knees at the front of the raft.

Jen paddles for all she's worth, freaking out as she watches her uncle struggle to get back to his seat.

Billy: UNCLE! We need you to get back in place and paddle! Come on, Uncle! You can do it! All forward, two!

Jen paddles and watches her uncle scrambling back to his seat.

Texan, paddling away. No clue what the other people were doing at this time.

Jen yanks her paddle out of the water and watches with relief as Uncle gets back in his seat. She then sees uncle take a glance at The Texan, who... is...still...paddling...

Uncle, seeing Texan paddling, and probably not hearing a word of what Billy is saying, plunges his paddle into the water and starts rowing us towards large, looming boulders.

Texan hears this and jerks his head around. "You said all forward!"

The rest of the boat was probably feeling an equal amount of fear...and well, dumb shock, by now.

(Btw, right about then, my inner monologue was going something like this:
OMGOMGOMGI'MGONNADIESTUPIDTEXANISGONNAKILLUSALLOMGOMGOMG!!!)

I kid you not. Billy and The Texan start arguing about what command Billy had issued.

We're not clear yet, people, and these two yodels are getting into a screaming match that amounted to an "I'm right, and you're wrong" squabble you would see in any schoolyard.

Needless to say.... we survived. We survived so I could tell you this tale.

The rest of the trip was SO much fun (once Billy and The Texan cooled their heels and made up)...and thankfully, no one went into the drink. More importantly, -I- didn't go into the drink.

Would I do it again? Heck yeah, I would! (Idiot, remember?)

The great part was that Sunshine was the rapids they took pictures at. There's a REALLY great shot of Billy and The Texan screaming at each other. Should've bought it. Should've.

Needless to say...it was a good time, people. Maybe next time I'll try a level five.