A good book, or six 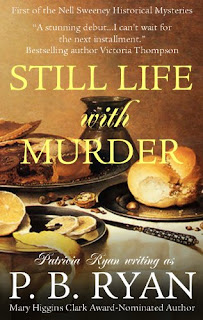 Don't you love it when you stumble across a book that sucks you right in and leaves you dying for more? Especially when you discover that it's the first in a series, and there are five more waiting for you?

I happened across P. B. Ryan's post-Civil War era Nell Sweeney mysteries last month while trawling the Kindle store for free books. The first novel, Still Life With Murder, was free on promotion, so I downloaded it, thinking it sounded okay, then left it a couple of weeks.

When I ran out of other stuff to read last week, I opened it up, and by the end of the first chapter, couldn't put it down. I ended up reading all six books in the series in a week. As good books often do, it got me thinking about novels and series of novels that are done really well, and what makes them so irresistible.

Still Life With Murder is described as follows, which sets up the basis for the rest of the series:

Boston, 1868: The wealthy are enjoying the height of the Gilded Age, a time of opulence for many...but not all. Nell Sweeney, a young Irish immigrant, knows what it is to have nothing. But when she earns a coveted position as governess to the wealthy Hewitts, Nell discovers that deadly secrets often lurk beneath society's gilded surface.

The two eldest Hewitt boys were thought to have been killed in the Civil War some three years ago. But one winter's day, the family hears word that their William is, in fact, alive and in jail for having killed a man...

Enraged at his son's deception and convinced of his guilt, August Hewitt is determined to see William hang and thus forbids his wife from aiding Will in any way. But Viola Hewitt believes her son is innocent and begs Nell to help her exonerate him. With few leads and even less time, Nell must rely on her wits and her knowledge of the city's dark underbelly to uncover the truth...before the hangman's noose tightens around William Hewitt's throat...

For me, these novels caught my attention totally and completely because they had:

1. A strong protagonist, Irish pickpocket-turned-respectable governess Nell Sweeney, who from page one had a clear, unique, and interesting voice. Heard that before, right? It's all about the voice.

2. An equally strong male protagonist who brings buckets of extra conflict- once-decorated battle surgeon turned opium-addicted professional gambler Will Hewitt. Flaws? Yes. Yes yes. Flaws like these are so good. Will would be the perfect man- he's decent, honorable, kind, and of course incredibly sexy- if it weren't for those blasted flaws of his. But those weaknesses make him all the more desirable, and all the more dangerous. He's the last thing Nell needs- but he's everything she's ever needed, too. They're each great characters on their own, but put them together, and you've got dynamite.

3. High stakes, and plenty of them. Nell has battled her whole life to rise out of the slums, and a chance moment of fate brings her that opportunity- but it's not that simple, either. In addition to her core ambition to make a better life for herself, there are numerous other driving emotions and personal histories that push Nell to do what she does, and in turn those deep cares and desires are also threatened when she's forced by circumstances to make hard decisions.

4. And she is, often, forced to make those hard decisions- from the first novel, she's locked into investigating a crime to clear the name of the male protagonist, and from then on her natural talents for solving mysteries and her moral/ ethical sense of right and wrong mean that she frequently goes to the aid of others at the possible expense of her own happiness. This is a combination of good character and good plot.

5. Vibrancy and colour- post-Civil War Boston is brought vividly to life by the writing, and the cast of secondary characters is full of fascinating people. I love mysteries that line up a whole cast of possible killers before letting you in on who really did it- and I really like those that retain the more vibrant of the innocent suspects as ongoing characters in later novels.

6. Subtlety and trust in the reader- possibly my favourite thing about the whole series was the slow reveal of both Nell and Will's past histories. There were little allusions stitched in from the very beginning to things like Nell's knife wound scars, and to a mysterious man from her past named Duncan, and more, but there were still aspects of her life that were not fully revealed until the last couple of books. Nonetheless, there was just enough shown at all times that the reader could fill in a few blanks and take some guesses- not all of them right, of course, but it's great to be given as much as you need at any point in time, and be left wondering just a little with the rest.

(Side note- who IS this person writing this blog post? I know, I know, the girl who loves to spoil spoilers for herself- this may be the first time in ages that I didn't actually want to know before I was told).

7. A beautifully evolving relationship at the core of the story- one you could really believe in and root for. I really loved the way Nell and Will's story unfolded, and I loved that it was unhurried, to an extent. It was so well-suited to the characters, their personalities, and the time and circumstances in which they lived. It was very real.

Anyway! All in all, I really enjoyed these books a heap. I think the author did so many things right, and it's always good to see what works.

If you like the sound of the Nell Sweeney novels, the first is back up to the whopping price of 99c on Kindle (bargain), and the rest range in price up to $3.99. You can find them at Amazon here, and the author's website is here.

Have you read a series you really loved? I think maybe I should say "except Outlander", since that's a bit of a given around here ;) What lessons have you learned from them? What really works for you?