When did you first know?

[Hi! Rachel here, doing my best to fill Kristen's Monday shoes (and enjoying the comfort of her Nike flip flops, let me tell you!) Kristen will be joining us on Thursday, blogging from a secret location about a super experience she's right in the midst of ... so stay tuned.]

I’m looking at my almost six-years-old daughter, head down, tongue poking out the corner of her mouth, as she scribbles away at what must be the fifteenth “book” she’s created this last fortnight. She’s been at school for a year now and adores reading and writing; hence the flood of homemade books about her friends, and fairies, and zoo animals, and, believe it or not, her wedding (which, hilariously, is chock full of details about her wedding dress, her flowers, her diamonds, the cake, but not a single mention of the groom – I can sense an “it’s all about me, sweetie" Bridezilla in the making! J). The other day she even announced, very confidently, that she is a writer, and that when she grows up she wants to write and illustrate children’s books – but not under her real name. Oh no. She’s already decided she’s going to write under a pseudonym - “Mrs Moo.” LOL!

I reckon I’ve got a budding author on my hands, and she most definitely identifies herself as such, and it made me stop and think; when did I first think of myself as a writer?

Certainly not at the tender age of six, like my daughter. But she’s not unusual; many writers say that as young children they just knew they were destined to write. And I wonder what it was that made them so sure of themselves, so early on, because I’m definitely a late-bloomer in this respect.

Oh, I wrote my own books, as my daughter does, but my output was nowhere near as prolific; then, when I was about eight, I had my first taste of publication when a five line poem I wrote about my cat was printed in the “Sunshine Club” section of my local newspaper. Ah, the thrill of seeing my own words in print (a teeny, tiny, corner of print!) As I moved into my teens, I wrote stories long-hand in the car to kill time during the family’s annual driving holidays; I managed to write the first ten chapters of an execrable fantasy this way, plus half of a ridiculous spy novel … so the writing-seed was there, no doubt about it, but the overwhelming urge to write had yet to take root. In fact, once I reached my mid-teens I really didn’t write anything at all for the next … twenty years.

Well, that’s not completely correct; through high school and university, and later, with my work as a lawyer, I wrote an avalanche of essays and assignments, and drafted copious legal documents and reports. So I was still writing, just not fiction. I’m not entirely sure why this happened. My guess is that the technical writing I had to do claimed every spare brain cell (yeah, I KNOW it did!), and left nothing over for creative work.

And no way did I consider myself to be a writer. The thought never even entered my head.

Even when I first joined Compuserve’s Books and Writers forum three and half years ago, and offered up my fist crappy snips for critique, I was just doing some “tinkering.” Some “typing”. I wasn’t really a writer …

With the critiques that pointed out the (many!) things I was doing wrong came enough positive feedback to fire my desire to continue to “type" and "tinker”, to do better.

Then, I won a writing contest; a very small, amateur contest, to be sure, but again, enough to push me along.

These things helped change my perception of myself, but in the end, what has finally made me think of myself as a writer is having confidence in myself. Confidence in my ability to manipulate words on a page, in my ability to grasp the craft of writing and put it to good use, and, every now and then, to produce something that others seemed to enjoy reading.

I know I’ll always be learning and (hopefully) improving, but not being wracked with self-doubt each and every time I sit down to write has finally made me believe - “I am a writer.”

What’s your story? When – and how - did you know, really know, that you were a writer?

P.S. And here’s a sample page of my daughter’s finished product. Her love of high-drama is clearly evident! 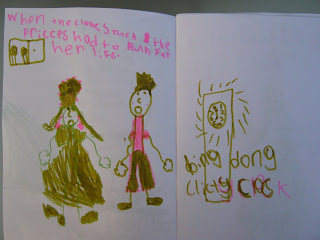 "When the clock struck 8, the princess had to run for her life!"