I have so many things to talk about today, but I'll try to be good. First, as Rachel mentioned yesterday, I managed to send off my application this morning for the Australian Society of Authors 2011 Mentorship Program.

I can't remember the last time I've stressed quite that much. Certainly not in any job interview for years. Definitely not in public speaking engagements. My mind takes me back to the final year exams in the last year of high school, twelve years ago. Either way, it wasn't fun. Choosing a ten-page excerpt from my story that I felt demonstrated development of a theme and growth of a character was bloody hard. And as is always the way, everything I read with an ultra-critical eye seemed terrible, when only yesterday the same stuff seemed brilliant.

But I gave my inner critic a good slap and got on with it, because hey- you've got to be in it to win it. Certainly the odds are long (15 places, about 300 applicants), but there's always a chance. I'm not sure if I'm more nervous about the idea that I might get in, or the idea that I might not.

In the meantime, I want to shout out to the beautiful people who held my hand at various times yesterday when I was freaking out, and in particular to the seven who read my two ten-page versions and helped me pick the right one- Rachel, Susan, Sarah, Tara, Cathy, Beth, and my lovely husband.

Husband gets the gold medal, though, girls. He reduced me to (happy) tears last night after reading the ten-page excerpt I was submitting, and declaring that it reminded him of my favourite author's work. Which, I know, is the husbandly job, right? Except that being a good lawyer, he went through each bit and analysed all the reasons why it worked in such a way that I knew he wasn't just trying to make me feel better, and he really did like it. You guys are all such fantastic cheerleaders, and I love you dearly for your encouragement and help. It's going to be a long acknowledgements list when I get this book done.

Now, onto the main game: my NaNoWriMo tactics. Planned tactics, anyway. This is my first year doing NaNo and to be honest, I've got no idea if I'll manage even ten thousand words, let alone fifty thousand.

But I intend to try.

And here's how I'm approaching it.

1. I will not touch any scenes that have a single word written in them already. Only new scenes.

I'm using an existing WIP. The NaNo FAQ says not to do this, because it carries too much baggage to let you write fast. I disagree- I think I know the story so well that I won't need to do as much thinking/ planning/ plotting on the hoof. But as part of not being held back by baggage, my first tactic is to tackle only new scenes. Period.

2. I have an outline that tells me everything I need to know about the story. No need to think it through as I go.

I've created a devilishly detailed outline that would make our resident chunksters cry in its complexity. I think it already did make Susan cry yesterday. I've been through the entire story and plotted it from beginning to end. No different from usual, except that I've broken down what were broadly planned sections into very detailed scene ideas, and I've broken each scene down even further into what I know should happen. This is the sort of thing I do anyway, but I've done it all in advance (instead of just some of it). That way, the thinking/ brainstorming part is already out of the way. All I have to do is shape the scenes as they come.

3. Stay flexible, but have a definite path to follow.

I haven't, despite how the previous point sounds, cut off my options. I recognise that as I write, things might change. Almost all my scene plotting is full of options- no absolutes. I've given myself the flexibility to bend with the story, but the structure to keep it on the rails.

4. Get organised and identify a plan of attack.

I've organised all my work, using Scrivener, for maximum efficiency. As you can see in the picture below (click to expand), I've reorganised the whole WIP by years- the story covers 1910 to 1917 at this stage- and within that, by scene. You'll see little numbers on the left of some of those scenes, and not on others. The numbers signify which scenes I'll be tackling in NaNo. The ones without numbers are those that already have checked baggage. If I have to, I'll jump out of order to write various scenes- but at the moment, I plan on knocking them down one after the other. 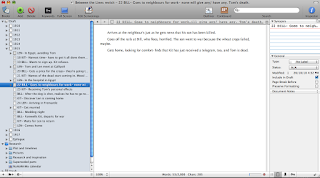 5. Schedule around other obligations, and be realistic(ish)

Lastly, I've created a calendar that includes all the other obligations I have this month, and I've allocated a rough total of maximum words I hope to get on each given day. I expect to have four days this month (including my daughter's second birthday) in which I'll get zero words written. I've compensated for that by having three days where I expect to get 4000 words. Almost all the rest, I expect 2000. This sounds like utter lunacy to me, but we'll see what happens. My best single day effort in the last three months has netted me nearly 8500 words. One good day like that, and I'll be buying myself some time off on other days. 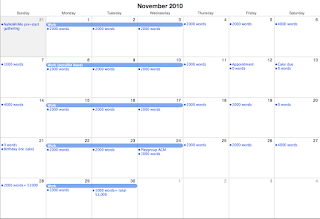 I think I, like probably every other WriMo out there, am prepared to write without looking back to edit. That's the final key to getting this done. Plenty of time to edit after November.

And I'm hoping I can make it to some of the regional write-ins and meetings in my local area- I'm amazed at how many hundreds of people in Perth are doing NaNoWriMo. Go us! We even have a long-standing word count rivalry running with the city of DeKalb in Illinois, which is a brilliant idea. Activate the competitive spirit, and we'll be all over it.

Hopefully NaNoWriMo will get their widgets up soon so we can include a word count monitor for each of us in the sidebar here- they're automatically linked to the NaNo site and should keep you up to date with how we're all going. We're also planning a weekendly check in where we'll state our respective positions, and post a small snippet.