In Search of Dexter 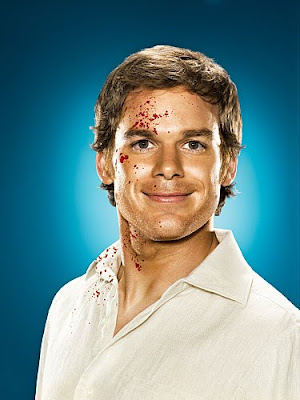 So, the weather here has been pretty crap lately. It makes me tired, grumpy, and a bit of a lump. This past weekend, when I _could have_ been writing, I wasn't. I was being a bum instead. And well, I decided to try to catch up on Dexter. I remember DEVOURING the first season, starting the second, and then getting caught up with life or what not. Umm, that was at least two years ago. Probably longer. Dexter is now on season ___5____!!! Yeah, I'm way behind.

For those of you who haven't watched this show... ummm, why not? LOL. Dexter is a GREAT series. The basic premise is this: Dexter grew up knowing he was different. He doesn't feel emotions the way others do; he doesn't feel anything except a desire to kill. His stepfather, recognizing this urge in Dexter, "trains" him to hide in plain sight by unleashing his murderous intentions on those in society who deserve death..i.e. other murderers. Hence, a serial killer who preys on other serial killers

Oh My Goodness. What is not to love about that premise??

Oh, there are other great things going on. The fact that Dexter works for the police department--blood splatters are his specialty. LOL. The fact that Dexter is involved with a woman with children, who in turn, has NO idea what Dexter is doing on the down low. I could go on. The tangled life Dexter leads is....well, uproariously hilarious. And yeah, I'm aware of how twisted that sounds. But it's true. Not only do I LIKE Dexter, but I darn well root for him to not get caught.

There is nothing more twisted than watching Dexter about to kill someone while knowing someone is right outside, steps away from discovering him--and FREAKING OUT--not because you hope this person might fly in and rescue Dexter's intended victim, but because you DO NOT want Dexter to get caught. You WANT him to kill the person and make a quick getaway. How sick is that? But that's exactly what I do each and every week. I cheer this flippin' maniac on.

What's my point in this?

Well, I realized while watching this that Dexter is truly one in a million. It isn't often that a writer hits gold with someone like him -- a lovable psychopath. Someone who engages in the most heinous acts imaginable, but who you kinda can't help liking anyway. :)

He's the dream, I'm telling you. That memorable character that I think we all, as writers, strive to create. Further, he's proof that sometimes we really need to stretch our imaginations and not pin ourselves down to the cookie cutter hero/heroine. That being "good" isn't always the most interesting path we can have our characters take.