I was writing a nice blog post about this week's procrastination experiment, but somewhat appropriately I got sidetracked, and it'll have to wait to next week.

I'm now in the thick of my final draft revisions. I started out wallowing around in the mud three weeks ago when it came to this. There was much discussion and gnashing of teeth at the CompuServe Forum endings thread here, and I started a new discussion on final revisions here. I hassled the ATWOP ladies by email, wailed about it on Facebook, and just generally thought that this process was a little bit more complicated than I ever realised.

Which it is, but all that was part of getting my mental processes in order, and now I've done it, things are rolling on like never before. I don't think I've enjoyed fiction writing more in the last four years than I have this week.

Most of you know that I'm a very process driven writer. That may be an understatement (grin). I need my little ducks in a row before it's clear to me how to move forwards.

This might not sound much like I have a complete second draft at all, but actually, the story itself has never been so coherent. Not on paper, quite, but in plot- I spent all day Tuesday running through the plot, creating a huge map of the rise and fall of tension, and at the end of that very useful process, I could finally see the story as a whole, and understand the place and purpose of every single scene. And that meant I had a very clear view, suddenly, of exactly what needed to happen with each and every one of those existing chapters, be they finished, half-finished, or a total mess.

The plot tension map has made several people gasp with horror over the complexity of it all, but it was actually very easy to do, and not really all that complex. Check out my rollercoaster (it's intentionally a bit fuzzy so as not to give away all my secrets- mwahaha):

I drew horizontal lines across four divided sheets of A3 paper- five of them, representing levels of tension from Lowest, through to Moderate, ending with Highest. I then drew vertical dividers for each scene. After that, easy as can be. I went back to my completed outline, and put each scene down against a level of tension. Totally arbitrary decision on the tension level of each, by the way- I just thought about what happened and took a guess.

After that, all I had to do was join the dots to have a visual representation of the rise and fall of the tension throughout the whole novel. I then went through and drew two more connect-the-dots lines- one for each of the two major subplots in the story. Here's a close-up, conveniently cut short just before it hits the good bits: 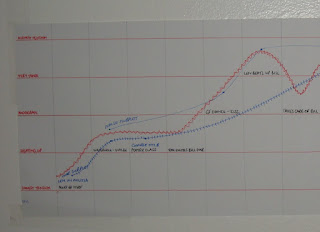 It's the first time I've been able to "see" the story as a whole and know that what I've written does what it's supposed to, on a structural level, at least- it takes the reader on an up and down ride of rising tension, through a nice, coherent story.

One of the things that seems to horrify about this kind of process is the idea that anyone might do it before they write, thus boxing themselves into a by-the-numbers approach that doesn't allow the story to flow. All I can say to that is, this comes after the writing is done. There's no boxing whatsoever. It's simply a way of organising my thoughts and viewing how the story unfolds, and that allows me to go back to the actual writing without worrying about whether it fits a bigger picture. I don't need to look at the forest anymore; I can hang out with the trees, knowing I'm not lost after all.

In conclusion, I'll leave you with a thought from the lovely Zan Marie Steadham on revising- we were discussing the dilemma of to rewrite, or simply revise, and how for many of us, rewriting is another form of procrastination (it is for me)- the easy way out to avoid the hard work of revising instead. I suggested that the temptation to rewrite entire scenes can be strong, but that if the curtains don't match the decor, there's no need to knock down the whole room just because you're better with a sledgehammer than a sewing machine.

Let me take a sledge hammer to the scenes that need to be rebuilt from the ground up, and use a sewing machine for the ones that need only new curtains, and give me the wisdom to know the difference.

Happy revision to those riding the same rollercoaster!