A murdered sister, ghostly possession and a war, oh my!

So, you didn't think Kristen was kidding last Friday about us giving up the blogging gig, did you?

No, joking, joking. I know it's hard to believe that the five of us aren't already signed up to feature films and Showtime mini-series, but we all love writing too much. So much, in fact, that we're all super busy with writerly things this week, and many of us may be delayed or even prevented from getting our posts up. Bear with us!

In the meantime, I want to officially announce that this Thursday will see us interviewing the fabulous Chris Womersley, who has written a great Australian novel called Bereft. 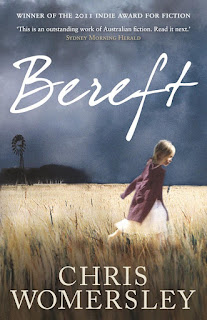 (I have cover envy, and I don't even have my own cover).

It is, as you can probably imagine from the title of this post, a twisty, turny and beautifully written tale about an Australian soldier, just returned from fighting in the First World War, who comes back to hunt down the man who killed his sister before the war, and in doing so, clear his own name. He's accompanied by a strange orphan girl he meets in the hills, who seems to know more about the crime and the soldier than she should. Touching on life, death, love, grief, revenge, justice, trust, betrayal and a little bit of magic, Bereft is a great read.

If you like a good literature novel or a good crime story, if you love Australian stories (or if you've never read one, and you'd like to start now!) then come back on Thursday and check out our interview with Chris, who was kind enough to share a whole lot of thoughts on writing, reading, and the topics covered in his novel. We'll be giving away a free copy of Bereft to a randomly drawn commenter, and you can enter from anywhere in the world.
Posted by Claire G at 4/05/2011 06:19:00 AM