Rachel is under the weather, so I'm dropping in to do a post on my latest obsession, my new cover! As soon as my publisher sent me the cover art, I've been in a fog. All right, so this *is* a bit of a narcissistic post, I readily admit. But I can only claim mercy as there is nothing quite like seeing the cover for your book to really hammer home the fact that, yes, you HAVE a book about to be published. That, yes, it WILL happen. And then there is the fact that getting one's cover is a dodgy proposition. A lot can go wrong. A lot.

What if you hate your cover? What if the sight of it makes you cringe? It's been known to happen. As a romance writer, I knew I walked a particularly loaded minefield of scary cover-fail. We're talking Fabio hair blowing in nonexistent wind, heaving bosoms spilling out of artfully torn gowns, or...gulp...pink! Endless, shiny pink. Shudder. So, yeah, I was just a wee bit anxious to see what my publisher would come up with.

Early after I signed with my publisher, my editor sent me an email to discuss my cover. I was asked to provide character descriptions of my hero and heroine, a key scene within the book that I thought might work well for the cover, as well as a list of covers I both liked and hated. That was fun. And, again, a little daunting. I'm afraid my anxiety might have shown as I provided not the brief paragraph of description as asked, but a full character dossier complete with images I liked. Ah, well, I like to be prepared. So off I sent my *cough* package, and then nothing. I heard or saw nothing for months.

But finally, a hint. The cover would feature my heroine only. Okay, that's good. I had mentioned that I disliked romance covers that had the characters clutching -way too reminiscent of those Fabio covers for me.

A little later, there were rumors of a photo shoot. Here are pictures as provided by editorial assistant Lauren Plude who is working on FIRELIGHT with my editor.


Then finally. FINALLY. The cover, which I admit, when I received the file, I opened with one eye open, I was so nervous. 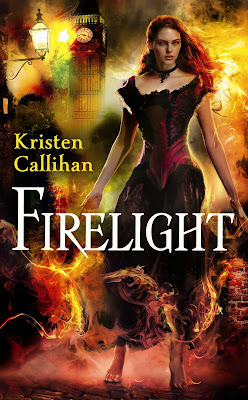 YAY! Not only did it avoid my personal romance cover pet peeves, but I think Miranda looks pretty kick ass.