The Power of Story in Fifteen Minutes

The animated short film “The Fantastic Flying Books of Morris Lessmore” is a delight to watch and deserves its Oscar nod as one of this year's animated short films. The film's creators call it "an allegory about the curative powers of books." I call it enchanting, inspiring, creatively brilliant.

The story follows the adventures of a simple man swept away to a magical land where books are more than old tomes on a shelf. It’s a charming little film and surprisingly touching. It left me a little bit breathless, a little bit sad, and whole lot happy.

Breathless, because of the beauty and simplicity of the story.

The State of Things ... And a Chair

Well, I'm still revising my book. STILL. Eight weeks of school holidays kinda killed the roll I was on, but in a way, I'm glad it did. While I didn't get much writing done, I did a helluva lot of thinking, and since I started back on the regular writing - three weeks of it now - I've made some pretty solid progress. In fact, things are slotting together in ways they never have before, and I'm cautiously optimistic I'll be done with this round of revisions by the end of May. I plan to print out my book for the first time ever at that point and read it through ... after which I'll doubtless curl into the foetal position and sob for a week. Then pull myself back together, do one last round of revisions and then it's off for beta reading. It's sure been a long and drawn out process, the writing of this novel, but what isn't killing me is making me stronger, right?

Anyway, I think I've found something that may help things along.

First, a question: is it a sign that I'm becoming a boring old fart that I get super, crazy, MENTALLY excited about purchasing ... a chair?

Well, in my defence, it's not just any chair. And it's not for just any old room in the house. 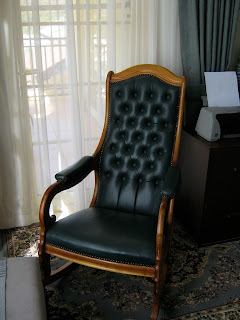 My chair of contemplation, in my study, for when I get to those bits of my book where I need to step back from the computer and go "hmmmm." 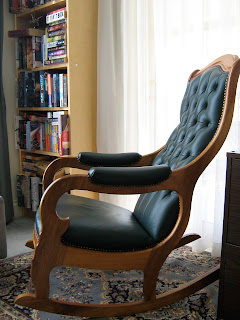 I've been in a writing/deadline hole -yet again! I can ALMOST see the light at the end of the tunnel.

Until then, I wanted to say that I was invited to hang out on Meljean Brook's blog. As I love her books something fierce, how could I say no?

Feel free to stop by. We're talking about Wonder Woman, kick-ass heroines, and giving away some stuff. Oh, and there are incriminating photos which involve a certain AWTOP member dressing up as a certain heroine. ;-)

Well, it seems that life is intent on keeping all of us at ATWOP pretty preoccupied at the moment, either pressing our noses to our various grindstones or taking us on new and exciting journeys ... or both!  So I have nothing to offer today but a couple of shiny bits of distraction that I stole from the interwebs.

First up is Heather O'Neill's hilarious list of rules for How To Date A Writer. It's been doing the rounds, but it's sure worth a re-run. My husband learned numbers two, three, seven and eight the hard way, bless him.

And from the annals of "what will they think of next" I give you The Composites, a blog that uses law enforcement composite sketch software to produce images of literary characters.  Some are quite odd (Mr Rochester looks like a caveman who's learned to use a hairbrush, in my humble opinion) but it's a fascinating concept.

I have been a lawyer, and am currently a mother of thirteen years standing, but rarely do I enjoy watching movies about lawyers or parenting as much as I adore movies about writers.

(OK, A Few Good Men and Parenthood are exceptions to this rule, but that could have more to do with my Keanu Reeves and Jack Nicholson fixations than anything else!)

I don't know why this is so. Maybe it's because the creative writing life is such an odd beast, and us writers have such interesting quirks (or so we like to think), that these movies hold such an appeal. Whatever the case, I've been on a bit of a writing movie glom of late, and thought I'd share some of my favourites with you.


This is a great little film that I only recently caught. It's essentially a romantic comedy, and to be honest, I found the main character of Tamara to be a tad annoying, but this is more than compensated for by the subplot of a writers' retreat in the English countryside, and the eclectic bunch of writers who attend it - the academic who's suffering the constipation of writers block, the best selling author with an ego the size of Kentucky, his long suffering wife/literary assistant ... and when the conversations turned to the old chestnut of commercial vs literary fiction, I had a good old giggle. Well worth a watch.


Paris When It Sizzles


Ah, what's not to love about this movie? The gorgeous Audrey Hepburn plays the sassy assistant to William Holden's screenwriter marooned in Paris with a chronic case of writer's block. There's much witty repartee between the pair, especially once Hepburn starts to help Holden overcome his writer's block by acting out his fantasies of possible plots. Sure, it's a bit of a cheesy romp, but I do adore this film.

OK, it's horror, but honestly, who amongst us cannot, in some tiny way, relate to Nicholson's slow psychological unravelling, culminating in sheet after sheet of "all work and no play makes Jack a dull boy"?


So, how about you? Do you enjoy watching films about writers and the writing life? Which ones tickle your fancy?

While technically it's not NaNoWriMo (National Novel Writer's Month) anymore, these little film clips are still valid today. The aspiring writer in them is a very clever conglomerate of every writer I know and the folly we encounter in our quest for the perfect novel.

Whiney Writer is inspired to write a novel: