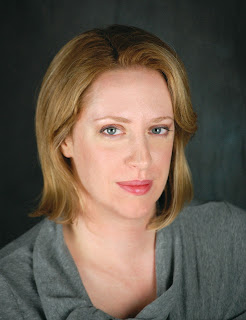 Kristen Callihan is a child of the 80’s, which means she's worn neon skirts, black-lace gloves, and combat boots (although never all at once) and can quote John Hughes movies with the best of them. A life long daydreamer, she finally realized that the characters in her head needed a proper home and thus hit the keyboard. She believes that falling in love is one of the headiest experiences a person can have, so naturally she writes romance. Her love of superheroes, action movies, and history led her to writing historical paranormals. She lives in the Washington D.C. area and, when not writing, looks after two children, one husband, and a dog -the fish can fend for themselves.


FIRELIGHT, the first book in the DARKEST LONDON series, is a gothic retelling of Beauty and the Beast set along the shadowy lanes of Victorian London, and will be published by Grand Central Publishing in February of 2012. MOONGLOW, the second in the series, will follow August 2012.

You can also follow her on twitter, or visit her website if you're feeling so inclined.
Kristen is represented by Kristin Nelson of the Nelson Literary Agency.

Pride and dark magic left Lord Benjamin Archer horribly transformed, forced to hide from society until he finds a way to undue his curse. A good plan, had he not done the impractical --fallen in love.

Miranda Ellis fears little, but is no fool. She knows accepting a marriage proposal from the enigmatic Lord Archer is tantamount to dancing with the devil. His strange masked appearance and foul temper have all of London wary. But the eyes behind the mask promise adventure, an escape from her father who has forced her into a life of crime. What she does not expect is Archer’s sharp wit, or the way his gaze melts her insides like hot tea to sugar. Suddenly her convenient husband has become quite tantalizing.

Then elderly noblemen start turning up butchered in the most gruesome of fashion, and the ton immediately suspect the oddly attired, thus sinister, Lord Archer. Such foul logic spurs Miranda to clear Archer’s name by investigating him, only to fall into a world of intrigue, clandestine societies, and an irate husband thwarting her at every turn. For Archer knows what Miranda cannot: to protect the woman he loves from an unstoppable killer, he must give in to the beastly nature he has fought so hard to keep within, even if it means losing his soul to it.


“Where are you taking me?” Miranda asked.


“I should think it obvious.”


She eyed him impatiently, and he made a small bow of acquiescence. “As you are clearly wasting away from boredom, I must make it my duty to keep you entertained.”


Her mouth opened, then promptly closed as an elegantly turned-out couple glided by, their eyes determinedly held away from Archer.


“You have not asked why I was following you,” she said when they were alone again.


Archer guided her down another corridor and into the Zoological collections. They paused beside a display case filled with beetles. “I know that well. It is because you are the most stubborn, impetuous, overtly curious creature I have ever known.”


Something rude passed over her lips, and the corners of his eyes crinkled. She turned away from him and studied a wall of pinned butterflies.


Archer’s sigh of resignation broke their stalemate. “All right, I’ll play your game. Why are you following me?” Despite his jesting manner, irritation sharpened in his voice.


“The peerage murders,” she said without thinking. The black mask faced her, the eyes behind it flat as pewter as the wide expanse of his chest hardened like mortar, and her heart sank with dread. Why had she prompted this conversation? Curiosity would be the death of her, to be sure.


Until Archer, she hadn’t thought of stillness as explosive. “You think I had something to do with them,” he said in even, awful tones.


“No!” She gripped the handle of her parasol. “No. But they have all made assumptions based on your appearance, and such skewed logic galls me. Guilt or innocence ought to be based on proof, not hearsay.”


His arm brushed hers as he moved past. “So your boundless curiosity bids you to discover my innocence,” he said over his shoulder. “Or is it proof of guilt you seek?”


Miranda quickened her pace to catch up to him. “I’d like to believe you are innocent.”


“Why? Don’t want to lose the security of my income?”


A snort escaped him. “Better to see me hang then and collect all of it, darling.”


“Oh for pity’s sake!” She thumped her parasol on the floor for emphasis. “I cannot believe it was you.”


He stopped abruptly and his eyes pinned her to the spot. “Which are?”

She refused to answer as she held his gaze, and his chin jutted forward in a rather pugnacious manner. “I should not have to explain myself to my wife.”
“And I should not have to ask for an explanation. Yet here we are.”
Laughter rumbled behind his mask. “A fine pickle we are in.”
“A fine pickle? An Americanism?”
“Yes. Five years there and my language is polluted.”
She ducked her head, trying not to smile. They turned a corner, and walked out into the light-filled main stair. She faced him again, and found him watching. “I shall ask it once, Archer. Whatever you say, I will believe it.”
His steps slowed to a stop. “Why?” His voice was a ghost in the quiet. “Why give me your trust when you know it is such an easy thing to break?”
“Perhaps the easy giving of it will make it harder to break.”
He made a soft sound of disbelief. “Lying is quite easy, Miranda Fair. I can assure you.”
“Amusing. But I don’t believe that of you.” She shifted to face him, the effect of which unfortunately brushed her skirts against his thigh. She couldn’t move away without drawing attention so she went on as if unaffected. “You hide many things, Archer. But you do not lie. Not to a direct question, anyway.”
The hard swell of his thigh slid along hers as he leaned in. “You’re collecting pieces of me, aren’t you?” His voice turned thick as warm toffee, rolling over her skin, heating it. “A bit here. A bit there. Soon you’ll set me out on the table, try to fit me back together.”
Ignoring the flurries plaguing her belly, she affected blandness. “I’ve only got the corners. But it is a start.”
Undaunted, he came closer. “I believe you have the center piece as well.”
Before she could reply, he spoke again. “No. I did not kill them.”
Relief eased the tightness in her shoulders. She dared not smile. Not yet. “If you know who did, would you tell me?”
This time he did laugh, sudden and sharp. “Not if I can help it.” Her ire rose when he suddenly reached out gave the curl at her neck a gentle tug. “I sense a predilection for trouble coming from you. I’ve no desire to encourage it.”