It's been a long few years writing this novel. If the book had been my baby, it'd be in high school right now. Scary thought. As Rachel has expressed before, there are times where I feel incredibly frustrated by the amount of time that has passed without me finishing this thing. At other times, I think about how much *life* I've lived concurrently, and how much I've learned, and I know that I've needed these years to be the writer I am now, and to be so much closer to the finish line.

In the meantime, there are some people in my life who just *get* how important writing is to me without ever expecting me to pick my game up or move onto something different, the way I might prod myself to do now and again. My blogmates and my wider circle of writing friends are at the forefront there.

There's also my husband, who is ever patient and always willing to listen to me yammer on. I have great friends out there, too, who always ask me how my writing is going or ask me about plot points or characters or events that I had no idea they knew.

But for my birthday a couple of weeks ago, one of my best friends surprised me with one of the most amazing presents anyone has *ever* given me, and I know that writers out there will be especially able to appreciate the awesomeness of this gift. 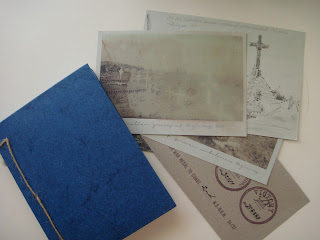 What is that? It's a hand-made World War I diary- blank, too, just ripe to be filled out by a certain fictional someone whose diary inspired the title of the novel, Between the Lines. 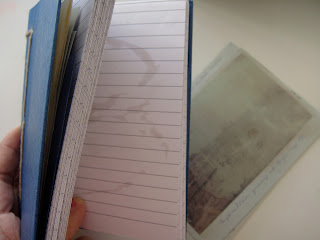 Inside, nicked from Pinterest, my blogs, the Compuserve Forum and independently researched, are photographs of the specific WWI locations and events that feature in my story, many of them turned into little postcards. It was especially amazing to me to discover, as I flicked through them, that every picture was exact to a location in the story- many locations and real events that I haven't yet pinned on Pinterest or mentioned elsewhere. I later confirmed with my friend that she had specifically hunted down snippets of writing scattered around the internet to get the right place names, and had researched those.

The attention to detail is such that a couple of the pictures show meticulously simulated water damage, just like you'd get if you sat in a muddy trench flipping through them :) There are some pictures of "home", too- exactly what I know my guys would keep with them. There's even one of Len's football team. When I first opened it, I got that it was a book, and I thought the pictures were cool, but I didn't get that it was *my* fictional diary, until I hit the letter folded up in the front flap. 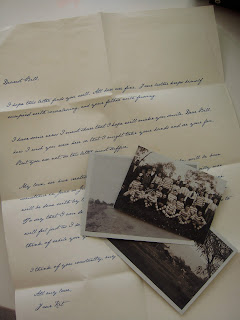 Yes, that's Kit's letter to Bill, giving him the happy news that she's having a baby, which he gets in the trenches just before breaking down completely and winding up as a mental patient. I can't even quite remember when I posted that here- a good long while ago, I'm sure. But that was the puzzle piece that put it all together for me and kind of made me cry a little bit.

Is that not the most thoughtful, brilliant present ever? Thank you again, Ricki :)

What's the most supportive and wonderful thing someone has done for you to show they believe in your writing?
Posted by Claire G at 5/27/2012 10:35:00 PM 8 comments:

Calling in from revision land …


Hey all! As predicted, revisions are keeping me busy, busy, busy. Lots of tightening of scenes and some big fat tranches of wholesale re-writing have ensued since last I blogged ... and I *think* I’m on track to make my May 31st deadline, but boy, it’ll be tight.

And if all this busy scribbling is not clue enough that I’m deep into revisions, the fact I suddenly have the urge to clean - me, for whom even the mere thought of housework sends a cold chill snaking down my spine - completely confirms it. And I'm not talking about wanting to do a quick tidy up here and there; no, what I find myself itching, positively itching, to do, is to clean every single window of the house inside and out. Even the six, second story windows! As we are about to head into winter and its attendent window-dirtying weather, this urge of mine is particularly insane. And smells suspiciously like procrastination to me. I will not cave. I will not!

On the whole, I'm pleased with how this round of revisions is shaping up. I've even had a few of those magical days where I was right in the "zone": you know, where your plot twists excite the pants off you, and your dialogue is snappy and your descriptions are rare gems of perfection and the words flow effortlessly from your finger tips … which had me pondering (OK, bemoaning) why these days don't happen more often. Why can't writing be like this all the time? Life would be so much easier.

And then I thought about that some more, and now I'm not so certain.

Imagine being that switched on, all the time? The mental and physical drain of it! You'd be a wrung out mess within a week, I'm sure. And without the many (many many) crappy writing days we endure, how on earth would we ever recognise - and be so grateful for -  the good ones when they finally come round?

It makes you think, doesn't it?

Anyways, enough of my ponderings. I'd best get my nose back to the grindstone ... and speaking of noses,  I'll leave you with this interesting little video - all about what makes old books smell the way they do. Mmm, I  really love that smell. I wonder if anyone's bottled it ....

As any of you will recall, I began a tradition of remembrance last year on ANZAC Day, the day when Australia stops to remember fallen soldiers from all conflicts. My plan was to pick a random name off a First World War memorial each year, and research the story behind the name as a way of remembering the sacrifices made by those who served.

This year, I happened to be visiting the area where my WWI novel Between the Lines is set on ANZAC Day. Oddly appropriate! I chose a name off the local war memorial, and researched the life and death of one Private James Dreghorn. 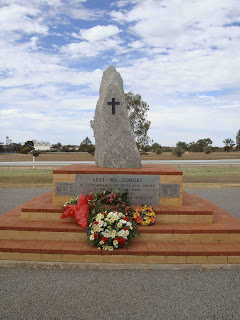 You can read it here at my new WWI research blog The Road to War and Back.

I know I’m in Act II because my loosely drawn plot says so. But why am I so darn lost here?  Like any good traveler who loses her way, I pull over and consult the map. I can see the spot I’m at, I just can’t see any farther.

Why am I lost? Why am I temporarily direction-challenged? Do I make a right or a left at the next scene? Do I continue straight ahead or back up? The only thing I know for certain is that I can’t stay here. In Act II. Forever.

There’s only one thing to do in a situation like this: I asked for directions. I called on my blog-sisters and each of them answered my plaintive wail for help with brilliant insight.

Here’s what I learned when you’re lost in the middle of your work-in-progress, when the scenes you’re stuck in give you fits:

1. Keep the Big Picture in mind. Step back a pace and look at the overarching story. Do the troublesome scenes fit the big picture? You’re essentially putting together a puzzle made of scenes and each scene has its place. If the scene doesn’t complete the picture, it doesn’t belong there.

2. Do the scenes drive the story forward, or put it in a tailspin? There’s a reason you’re stuck and perhaps the scene isn’t working because intrinsically you know it’s off-track. You’re off the highway and bumping down a rabbit trail.

3. Do the scenes compliment the tone and “feel” of the rest of the story? Do they fit, or do they stand out radically from the others?

4. Focus on one message or theme. What is the point of your story? How does it effect the hero and those around him? Do the scenes help or hinder that theme?

I have a clearer picture of where I’m going now. It was actually a blessing to be temporarily lost. I needed to pause and get my bearings and now I can set off again with confidence. The best thing about getting lost, however, was knowing I could count on my blog-sisters to keep me pointed True North. Thanks ladies.
Posted by Susan Montgomery at 5/04/2012 01:06:00 PM 4 comments: