Reading between the lines

Good morning and good week to you all! And thanks again, readers, for your wonderfully supportive response to our launch last week.

This week we'll be talking about WHAT we write. This is your introduction to the fictional worlds in which we each hang out. Needless to say you'll be seeing a lot more of those as time goes by, so if you're curious to know more about what lies behind our stories, then this is the week for you.

And if you know nothing at all about our stories, then read on and discover! We'll also each be posting an excerpt from our works-in-progress this week so you can see what we're all about.

As mentioned in my introduction, I write across a whole range of genres, from crime fiction to Gothic thriller. But the story that has held my attention for more than a decade is BETWEEN THE LINES, which is best described, I think, as a family saga with lashings of literary fiction and war genre.

I talked a little bit about the story in my last post, and I'll be posting an excerpt from the story today. So I won't go through it all again- instead I'll tell you a bit about what lies behind the story; between those lines. There are a lot of inspirations in the story, so for now I'll stick with the biggest one: a family war diary with a tragic love story.

BETWEEN THE LINES is, at the core of it, a story about the redemptive power of love and family. It's not a romance, really, though it begins with one- my main character, Bill, is a young man of 18 when the First World War breaks out, and he's madly in love with his childhood sweetheart Kit at the time. But the war is an irresistible force, and Bill is drawn into it after his best friend is killed. And while he's away, the unthinkable happens- though he survives four years of war, his girl Kit dies.

The very thing that has been keeping him going is now gone. The hope he was coming home to no longer exists.

Or so he thinks. But what he doesn't realise until he gets home is that Kit died in childbirth. His great love is gone, but in her place is another- his son, Jared. The complicating factor is this: Bill's nasty older brother Lionel always had his eye on Kit, too, and after returning home a hero from Gallipoli, Lionel was left alone with Kit while Bill went to war.

Is Jared really Bill's son? Or could he be Lionel's? Bill knows he can trust Kit, but there's no way he can trust Lionel. As he grows up, Jared hears whispered rumours, and turns to letters and diaries to find the truth.

The theme of lost love and family is based on the story of some of my relatives whose lives were changed by the Great War.

In 1917, my great-great aunt Vena was engaged to be married to a local boy, Thomas Lockyer. They were both young and in love, and life was good. Sadly their hope for a long and happy life together was dashed when Tom was killed by shelling at Maricourt Wood in 1917 after only a few months as a soldier.

Tom's diary before the war shows a pretty relaxed way of life. Tom's diary during the war doesn't change much. Every day he wrote what he ate for breakfast, lunch and dinner. He was a man of few words, mainly because the diary didn't have much space for rambling.

Before signing up: Tom talks about going visiting with a friend, and doing some shooting. Regular teenaged country boy stuff. 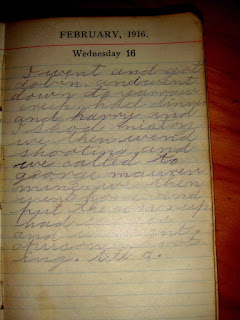 During training: Tom talks about marching drills and eating, which seem to be his two main pastimes for a full couple of months. 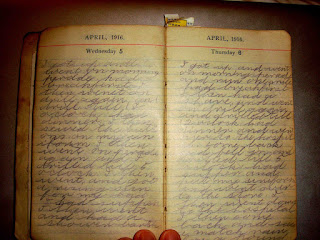 All I could think when I first read this diary was, what's behind those words? What's between those lines? What's he seeing every day when he writes about getting up, eating bread and butter, then falling in line? What's he feeling? Does he miss his fiance? His home? Or has he really shut himself off to keep the reality of war away?

Just a few months down the track, Tom is in the trenches- and he's still talking drills and food: 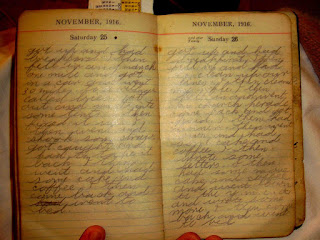 Tom's death destroyed my aunt's life. She never married and died a spinster in old age, always pining for her lost love. Despite that, I couldn't help but wonder what life would have been like for them if he *had* made it back from the war. How would his experiences have shaped him? How might they have affected his family?

All of these questions are why I'm writing about Bill and Jared. They're my attempt to understand the impact of war through the generations. When I read Tom's diary, I feel like I know him. He reminds me of guys I went to high school with- and no surprise, because I don't think the Aussie bloke has changed all that much since 1916.

He reminds me of my current family members, too. People in my family still say they've "had a feed" after they've eaten- it's the lingo of country Australia, of families who have lived in the same place for a long time. Communities that hadn't changed much until the war came along. And then with the loss of a generation of men, things began to change.

These days, Red Range, the town where Tom courted Vena, is all but gone. The only thing remaining of my family, beyond the ruins of their house in a farmer's paddock, are their tombstones.

Writing this story connects me to those generations by making me realise that who *I* am has already been shaped by their experiences. They way they felt about life, love and loss informed my grandmother and my mother, and as a consequence me. The effects are subtle and subconscious, but they're there. Through every family runs a thin wire connecting the generations, and their loss is my loss. The nation's experiences in war have been partially responsible for making me who I am today. It's quite a thought.

At this stage I don't plan to follow Bill and Jared's family all the way through the ages, but by following their journey I've at least come to understand a lot more about where I come from, both in a family sense and as an Australian.