"The first draft of anything is always shit." Ernest Hemingway 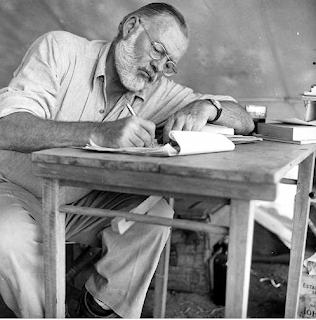 Thanks for the reminder, Ern. I really needed it this week, because I’ve started the big read through of my manuscript, and guess what?

A lot of it just plain sucks.

In fact, the first third of it will need to be completely re-written. And I am neither surprised by this, nor disheartened.

I wrote the early parts of my book as a wet behind the ears, newbie writer; these early sections suck because they’re the work of someone who was completely clueless about what she needed to do to in order to write a book. Oh, the writing itself is tolerable, but the lack of an interesting, coherent plot is patently obvious. Which is what I was expecting.

Now, nearly four years after starting this manuscript, I know I must outline, or I’ll find myself somewhere in Outer Mongolia with a broken compass and no way out. And I know I need to spend a big chunk of time thinking and plotting out my story before I actually write it. Did I do any of this back when I typed the first words of Blood of the Heart? Heck no. No outline, no cogitating about the plot or character development - in fact, I didn’t even think about what genre I was possibly attempting to write. I just wrote ... and here I am, up to my knees in crap.

At least I now know what I did wrong; I know the major causes of the major suckiness of my first draft.

Does this mean I will never, ever, write a shitty first draft again?

Nope. Because for the vast majority of writers, a SFD is unavoidable. With the first draft, you pour out all your ideas, good, bad and ugly, go off on tangents, layer on the clichés … but there will be some good stuff amongst the crud. And, most importantly, you lay the foundations of what will eventually become a solid book, if you do the hard yards of revisions.

When revising a SFD, the words are already there, the story is out of your head … and that’s the time to build on those words and that story, and make them better. Of course, that just might involve tearing the whole thing down and starting again, but at least you’re clearer on where you’re going, what you’re trying to build, the second time round. And then the third, and the fourth and the fifth …

Sure, over time, and with experience, your first drafts may become a little less shitty. But they’ll never be completely crap-free. So, hold your nose and embrace your first drafts. They can't help being shitty.