Age shall not weary them, nor the years condemn

Life just HATES me right now- I'm laid up with my second case of tonsillitis in as many weeks (!). Probably it means that when I stopped taking my course of antibiotics a couple of days early, as usual, the little germy buggers that had been beaten into submission were able to hang out waiting for reinforcements, and now they're back with double intensity, and I would rather like to sleep for the rest of my life.

So, instead of a very original post here today, I'm recycling a Letter From Home I wrote for the Compuserve Writers Forum some three years ago.

But before I get into that, a little administrative announcement: I've started up a "fan" page on Facebook as a place where you can go to get updates on and excerpts of BETWEEN THE LINES. Follow this link to "like" me, or look up Claire Gregory- Author.

Anyway! Back to more serious business.

This Sunday is ANZAC Day in Australia, April 25th, on which we remember the troops who died for this country in WWI and later wars. It's a very solemn and sombre holiday, and one that has always held great meaning for me because my beloved grandfather fought in WWII. But the meaning has increased even further for me since I've been writing BETWEEN THE LINES, because April 25th is the day the first ANZAC (Australia New Zealand Army Corps) troops landed on the beaches of Gallipoli, Turkey, to face a slaughter this young nation could never have imagined. Originally, my main character Bill was amongst the first to land. But plot changes mean that he's not going to join the Army until a little later in the piece. Nonetheless, both his brother Len and his best friend and brother-in-law Tom are amongst those who land- and Tom is killed, while Len is seriously injured.

I wrote a letter about the relationship of my then-home town Albany, Western Australia, to the ANZAC legend- it was the port from which most of the ships departed to go to the war. But the one I'll share with you today is my account of attending the dawn service, held each year at the time the men charged the beaches. It was an incredibly moving experience for me, and I think a fitting tribute to those we remember on ANZAC Day.

As the ode goes, recited each ANZAC Day:
Age shall not weary them, nor the years condemn. At the going down of the sun and in the morning, we shall remember them.

I've just been to my first Dawn Service for ANZAC Day here in Albany, Western Australia, as referred to in my previous LFH. I thought I'd share my experience with you very briefly [note- all right, not so briefly, but never mind!] on this day, which is considered the foundation of our Australian national identity.

The service starts at 5:30am, at the Desert Corps memorial at the very top of Mount Clarence, the highest of three granite hills overlooking our harbour. Because this is one very well attended ceremony, there's no parking, so it required hiking up the hill, leaving at 4:30am. It's autumn here, and it can be bitterly cold- they were expecting rain, but instead the sky was simply streaked with ribbons of dark cloud when I got up at 4am, all the stars in the world winking out in the night sky and the air crisp and clear but warm enough that I didn't need a jacket.

I met up with some friends who live at the base of Mt Clarence, and we set off in the pitch black up a bush track, surrounded on all sides by trees reaching up into the black, silhouettes sharp against the milky way overhead. It was this time of morning, 4:30am, that the 11th Battalion of the 1st Australian Imperial Forces (the Western Australian battalion, interestingly) went over the side to land on the beach at ANZAC Cove 92 years ago today. The 11th were first off the ship because they were to provide covering fire.

Listening to the stillness of the bush, broken only by the occasional whir of a cricket or trill of a nightbird and the distant rumble of the ocean crashing onto the beach below, I couldn't help thinking about the thousand young men in that battalion as they waited to go over the side. There must have been fear, but also excitement- nobody knew what to expect. It still seemed like a big adventure at that point. They certainly didn't expect the barrage of shellfire and machine guns that met them as the landing craft drew into shore. I doubt any of them could have imagined that by the time the sun rose that day, the ocean would be glinting pink with blood, and all of them would have lost at least someone they knew and cared about.

By 5:20am we reached the top of the hill as part of a steady silent stream of people marching up to the monument where the service takes place. Each year, there are fewer and fewer Diggers (Australian troops) from WWII left- we lost our last WWI vet last year. Nonetheless, each year there are more and more people at these ceremonies as the urge to remember swells. The ceremony is quite simple- prayers, the Last Post floating hauntingly from the bugle out over the ocean, a poem and a benediction, the raising and lowering of the flags to half mast, and then the National Anthem.

As the strains of the anthem drew to a close, we turned to find the dawn breaking behind us. Albany sits on the coast of the Southern Ocean, with headlands and granite hills bending around to create an undulating coastline, and steep granite islands out in King George's Sound. From Mt Clarence you can see it all, and this morning as the light grew and the night seeped away, the colours of the sky were just magnificent- violet and gold over the ocean, while behind us where the morning was yet to reach the stars still twinkled out of the deepest purple I've ever seen. The ceremony ended with a tiny ship way out on the ocean dropping a wreath into the water to symbolise remembrance of the fleet that departed these waters on November 1st 1914 for Egypt and Turkey. Once the wreath was in the water, they fired off two bright red flares. We all watched until the floating lights died over the water, and that was it.

I have always meant to come to a dawn service, but I've never gotten around to it. I don't know why I and so many other people my age felt compelled this year in increasing numbers, but I suspect it is down to the fact that my grandparents are almost all gone, and with them the stories and the memories of those years. I went today for my grandfather, who was captured in Crete in 1941 and spent four years in a German prisoner of war camp; I went for Thomas Lockyer, a young miner from my family's home town of Glen Innes, NSW, who was engaged to our great-great aunt Vena and departed for war in 1917, only to meet a bullet at Maricourt Wood in France. Aunt Vena never married, and died a spinster in her eighties, having lived her whole life with a broken heart, the only remnant of her lost love the diary he had on him when he died, which was returned to her years later. In it he had written a poem for her, which starts- Sweetheart mine, the world is weary/ When you yet are far away... I cry every time I read it.

I'm writing now about the two world wars because of these men and all the others who lost their lives, and what they gave up and what their families gave up when they waved them goodbye for the last time. I'm glad I went today, and I'll be back next year for sure- getting up at four am doesn't seem like such a sacrifice when you consider what those boys, most around my age, endured. 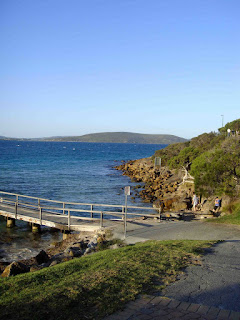