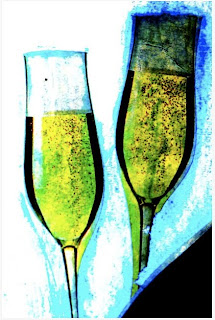 I have not written or revised a word for over a week, what with the Easter break and the kids now home for three weeks of holidays. In fact, I haven’t had the head space to even think about my manuscript.

But in truth, it’s not all bad. What I did do over the Easter long weekend was catch up with friends and relatives over long lunches and dinners, which brings me to the topic of this post (which has nothing whatsoever to do with writing, but never mind) …

In my house, it’s the first beverage opened when friends come round for a meal or when there’s an occasion to celebrate. And it just so happens that one of my characters in Blood of the Heart is a wine merchant – a negociant, to use the French – dealing exclusively in sparkling wines from his Champagne vineyard. Sebastien Ricard plays an important role in my book; he’s the man my main character reluctantly finds herself falling for (in between her encounters with a serial killer, that is) and a part of my story is set on his vineyard. So when I came to write him, I set out to discover all I could about the nineteenth century champagne industry.

And I discovered some very interesting facts – and some busted myths – about this bubbly beverage.

First up, we all know about Dom Perignon, the seventeenth century monk with a nose as sensitive as a bloodhound’s and taste buds to match, who was the first to invent the bubbly stuff. In fact, he is said to have proclaimed, “I am drinking the stars!” when tasting a glass of his sparkling wine. Right?

Wrong. While he was a brilliant blender of wines, it is a fact that in the 1600s, and for a long time after, no one liked bubbles in their wine. It was the sign of a wine gone bad, a wine that had undergone a second fermentation in the bottle to produce what was then known as “the devil’s wine”. Far from inventing and producing bubbly wine, Dom Perignon was charged with the exact opposite – fixing whatever it was that was causing the secondary fermentation in some of the bottled wines in his cellar, because it was ruining his abbey’s wine trade.

So from where does the myth of Dom Perignon originate? Apparently, it was only at the end of the nineteenth century, when champagne was firmly fixed as a desirable luxury beverage, that the house of Moet and Chandon saw the potential of the monk myth as a marketing device, and began touting this fiction as truth. C’est la vie.

Regardless, there’s no doubt that champagne is quintessentially, and singularly, a French invention. It couldn't be anything but ... could it? Well yes, actually, it could.

Wine historians now believe that bubble-infused wine was first discovered by (and I’ll say this very quietly to prevent the outbreak of another cross-Channel war) – the British.

In the 1600s, wealthy Britons would import casks of wine from France and bottle it themselves. Prior to sealing their freshly bottled wine, they would dose it with brandy to prevent it from going off; but if any yeast was present in the wine, the addition of the brandy would kick off a second fermentation in the bottle which in turn would produce … bubbles. Et voila – we have an early, crude, version of champagne. In England. Who would have thought?

And in England, this wine developed quite a cult following, scientists devoted themselves to unraveling its secret … and all the while, Dom Perignon was in his cellars, freezing his sandaled toes off as he tried to rid his wine of its froth.

And the perception of elegance that surrounds this drink is also not all that it seems. Hidden beneath its golden exterior is the fact that champagne was – and still is - a demanding mistress. Few wines require more attention in their production than champagne, and in the nineteenth century this equated to very hard work indeed, in the vineyard and, even more so, on the production line.

An example: while undergoing the secondary fermentation that produces the magical champagne bubbles, bottles of still wine are stored on an angle, neck first and pointing downwards. Winemakers in the nineteenth century used tabletops, stood vertically and with holes carved out for the bottles to slot into, for this purpose.

Storage of bottles at an angle allows the winemakers to deal with the nasty by-product of fermentation – sediment. Not what you want to find in your mouthful of pricey Cristal. In the nineteenth century, workers known as “riddlers” spent their days below ground in the frigid darkness of the champagne cellars, turning each bottle in its slot a mere fraction at a time, so the sediment would fall to the neck of the bottle. Over time - and this could take months - the sediment would form into a ball which would be expelled when the bottle was finally popped opened, then topped up with wine and re-sealed, ready for sale.

It took a practiced hand to get the turn of each bottle exactly right, but when the task was mastered some riddlers could turn up to 50,000 bottles a day. These riddlers, working beneath the earth, day in, day out, earned a reputation for being pale, squint-eyed and cranky. Not surprising, really. 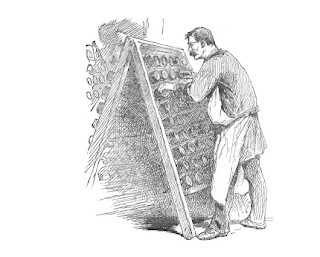 A riddler at work. His crankiness is self-evident.

But despite the busted myths and the harsh realities, champagne is without doubt the stuff of romance and legend, and the story of Veuve Cliquot – my most favourite of champagnes but so damn expensive – is part of this tradition.

In the early 1800s, Barbe-Nicole Clicquot Ponsardin, raised to be nothing other than a wife and mother and left widowed with a young child before she was thirty, took hold of her life and built Veuve Clicquot (which means “the widow Clicquot) into one of the greatest Champagne houses in the world. Quite a feat for a woman in those times. Obviously, she was a force to be reckoned with, which was demonstrated during the Napoleonic wars when her cellars not only survived an occupation by the Russian army (forewarned, she prudently bricked up the cellars containing her most precious vintages before the troops arrived), whilst at the same time making a killing – and a new market - for herself, when the commanders of the Russian forces discovered how good her wine was and purchased, rather than pilfered, her remaining stock.

Many of the great champagne houses were founded on similar acts of bravado and daring, and many negociants were natural showmen – like Eugene Mercier, who in 1889 commissioned the largest barrel in the world and filled it with nearly 200,000 bottles of wine for the Paris Exhibition.

So it is the romance of champagne that makes it a vital element in our celebrations to this day, from toasting the New Year or the birth of a child, to celebrating anniversaries and victories and the launching of boats. And only champagne could have prompted the likes of Byron (who famously stated that lobster salad and champagne were the only things a woman should ever be seen eating) and Winston Churchill - “Champagne is the wine of civilization and the oil of government” – to wax lyrical about it's qualities.

But I think the last word goes to Lily Bollinger, who managed the House of Bollinger from 1941 to 1971:

“I only drink Champagne when I’m happy, and when I’m sad. Sometimes I drink it when I’m alone. When I have company, I consider it obligatory. I trifle with it if I am not hungry and drink it when I am. Otherwise I never touch it – unless I’m thirsty.”

The Widow Clicqout (2008) by Tilar Mazzeo

A History of Champagne (1882) Henry Vizetelly (via the Gutenberg Project)