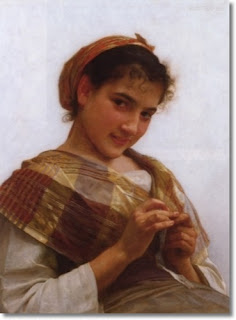 Painting by William Bouguereau
Some women flutter their eyelashes as a form of communication with the opposite sex. The problem, mused a fellow recently, is that a guy can never tell whether the woman is flirting or has something in her eye.

Men can be dense, can’t they?

They can’t be entirely blamed for the confusion, however. Communication is a real art that takes many forms and flows from many sources. The chances of something going wrong in the translation is fairly high, particularly if the communication is between the opposite sexes.

In the book, Louder Than Words: Nonverbal Communication, author A. Barbour notes that only 7% of communication is verbal. The rest of the message is made of vocal characterizations and body language.

What does this mean for fiction writers? It means there is a huge opportunity for layers of subtext and subtlety. There’s room for characters of such depth and richness that they nearly walk from the page into your room.

Dialog is only a fraction of the communication taking place in your novel. Here are other ways your characters send messages:

Personal Space - every culture has acceptable limits for this. Characters who abide by the rule of personal space, or who violate it, are making a statement. Conversely, characters who feel their space being crossed have opportunity to react.

Facial Expression - probably the easiest and favorite method of authors to describe how their characters are feeling or what they’re thinking and for good reason: facial expressions are one of the most powerful channels of nonverbal communication. Facial expressions also include eye contact and the length of gaze. People routinely search another’s eyes to gage their level of interest or emotion.

The Body - another favorite of authors because with the body of our characters we describe movement, posture and gestures. During dialog, pay close attention to these and use them to either reinforce or contradict what your character is saying.

Smell - a person’s smell, pleasant or unpleasant, can be employed by the clever author. Don’t forget to have your character get a whiff of someone. Or himself.

Voice - not only does this include the choice of words your character uses, but his accent (if he has one), tone, and loudness. Don’t forget vocal characterizations - laughing, crying, whispering, grunting, and others. But a word of caution: use these sparingly, if at all. It’s much better to convey emotions through the actions of the characters. (That old rule Show, Don’t Tell applies here.)

One last tidbit to keep in mind when writing dialog. The nonverbal aspects of the dialog can cleverly do several things for you. It can compliment what your character has said or it can contradict it. Don’t be afraid to have your character say one thing and do another. It’s human nature, after all.

I love to write dialog. I hear the words my characters speak quite freely. But I now have a new challenge to employ more of the nonverbal methods humans use to send messages. I can use those ways in my work to make it better, to make the subtext richer, the tension tighter, the meanings more layered.