When I look into your big brown eyes
It's so very plain to see
That it's time you learned about the facts of life
Starting from A to Z.

Let me tell you 'bout the birds and the bees
And the flowers and the trees
And the moon up above
And a thing called love.

Dean Martin
(Herb Newman, 1964)
The Birds and the Bees
The facts about the birds and the bees is a discovery we probably all remember making for the first time at some stage. For me, I can distinctly recall my parents hauling out the old Where Do I Come From?, presumably prompted by one too many curious questions, to enlighten me to those previously unimagined facts of life. It was an eye-opener for a nine-year-old, for sure.

I have no idea how I'll tackle that particular conversation with my own kids when the time comes, but at the same time, I'm kind of hoping I get the chance before they catch the answers on YouTube or in the schoolyard. In these days of Google knowledge and 50-Cent music videos, it hardly seems quite as secret anymore.

The times, they are a-changing- but they've already changed so incredibly much in the last century that it's sometimes hard to fathom.

My story is set in 1914, and the major plot point revolves around young love, sexual discovery, and the birth of the next generation. Figuring out who knows what about love and sex, how they found it out, what it means to them in the bigger social context of the time, is pretty critical to creating realistic situations and realistic responses.

A couple of months ago, I somehow stumbled into discussing this topic with my grandmother, who was born in 1919, and what she had to say about her understanding of the ways of the world was fascinating.

Growing up through the 1920s, she learned about the birds and the bees through- well, the birds and the bees, and by growing up on a farm where the facts of animal husbandry were well known. But as to human relationships, they just weren't discussed, physical affection was not demonstrated openly in public, and she admitted to being desperately curious about where babies came from. Whenever a cousin or female friend of the family was expecting, she would "disappear" from view for a while, and would eventually reappear with- ta da!- a baby.

How did these things keep turning up? All the kids wanted to know, and went as far as attempting to eavesdrop from behind bushes or under windows, with limited success.

We didn't talk about how she eventually discovered the answers to her burning questions, but it definitely impressed on me that back in the day, whispers and rumours formed the bulk of education; glimpses of scandalous novels most likely providing some further details- far more direct if there was an older and more experienced sibling to advise, or for boys, a whole crew of mentors out in the shearing sheds. Beyond that, I'm sure stolen kisses behind the hayshed and moments of intense connection and sworn devotion at (and after) the local dance were natural steps up the ladder toward full enlightenment.

After the fact, I know my own family's genealogy has a fair few babies born within a couple of months of a wedding date, so the shotguns were out and at the ready where needed. And the Home for Unwed Mothers and the adopting out of fatherless babies was another resort for those for whom full commitment was unobtainable, and single parenthood not an option.

Though not openly discussed in the historical records of the time, this stuff isn't hard to imagine. It's even more interesting to consider the more deeply hidden aspects of sexuality and relationships through these times. Though not the same time period, a friend has just blogged her review of The Secret Diaries of Miss Anne Lister, which give a fascinating insight into lesbian relationships in the Regency Era- worth reading for an example of the ways in which people did, and even more significantly did not hide their relationships from those around them.

And back in my own era of interest, I was completely flummoxed to find a full pictorial advertisement for the marvellous Dr. Johansen's Auto-Vibrator Massage Appliance on the front page of the country newspaper (click image to enlarge, and check out those optional extras!). 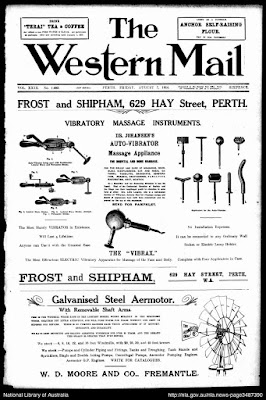 At first, I thought I must be applying my modern sensibilities to understand just what this thing was for. But then I happened across this fascinating article that explains the medical approach to treating "hysteria" in women in that era, and I was hit with the somewhat startling realisation that perhaps the obvious was not so obvious when it comes to what some of my characters might have known about their own budding sexuality.

Either way, it entirely depends on the individual and what they might do with the knowledge available to them- but it's fascinating to ponder all the same.

Being ever-curious, and with questions yet unanswered, do share- in what era is your story set, and how did your characters find out about the birds and the bees, assuming they have already? Do they have secrets they hide from society, or do they go proudly against the grain?
Posted by Claire G at 9/18/2011 08:50:00 AM