Writing Without a Safety Net 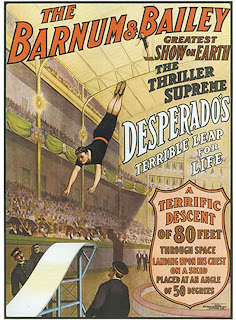 Look Ma! No Hands! No Backup!
My mom is currently visiting. In a lot of ways my 72-year old mother is far ahead of the technology game than I am. She owned a cell phone for years before I ever felt the need for one. She knows what “blue tooth” is - something I’m still fuzzy about. She has a Mac Book, wireless internet, and a wireless mouse. She’s got a camera with a global positioning device.

When she doesn’t understand something she goes to the Genius Bar or to someone who can answer her questions. This once led to a major disaster. She let the “geeks” fix a software glitch and in the process lost all her iTunes and every single folder and album in iPhoto. Hours of laborious editing, sorting and filing of photos were gone in an instant. (Thankfully the original photos were still in the library.)

This disaster isn’t insurmountable. She can load her music back onto the computer. She can sort her photos again. But her experience has given me pause to think… when was the last time I backed up my writing?

Unlike my Mom’s experience (where her stuff can be easily found again), writing, once lost, can never quite be recovered. Yes, I can rewrite the lost scenes, but they’ll never be the same. Some will be lost forever, some might be better off lost, and some might actually improve with rewriting. But the fact remains that the work, and the words I initially recorded, are gone forever.

My method of backup is simple enough. I use Dropbox. Dropbox is ingenious. I don’t have to think about it. It’s there, doing the job. Dropbox is quietly working behind the scenes to keep my writing secure by making note of any changes to my writing in Scrivener and syncing it each time I close the program. As a secondary measure, I also export the novel, email it to myself at my gmail address and store it there under “archives.” In addition, I have an external hard drive that my Mac’s Time Machine uses.

I think I’m covered, but this wasn’t always the case. I was once in the horrible situation of having a dead computer and along with it an inaccessible Scrivener program. It was months before I figured out how to transfer the gobbledy-gook of a .scriv file (thankfully archived in my gmail account) to something Word could read. My euphoria at that moment was incredible.

The point to all this is, of course, to backup your work. You’ve heard it before. It’s one of those odious things like having a mammogram or going to the dentist. Hate doing it, but it’s good for you.

I admire my Mom immensely. She's joined the computer age even though she tells me, "I was born before all this. My brain is from a pre-computer era." Indeed. She was thirteen years old before she ever talked on a telephone! First thing we're doing tomorrow is setting up a Dropbox account for her so she can continue to play with technology without the fear of losing her treasured photos.

When’s the last time you backed up your writing? Do you have a favorite method? (I highly recommend Dropbox if you don’t have one.) If you do have a favorite backup routine, care to share?
Posted by Susan Montgomery at 9/09/2011 01:58:00 AM