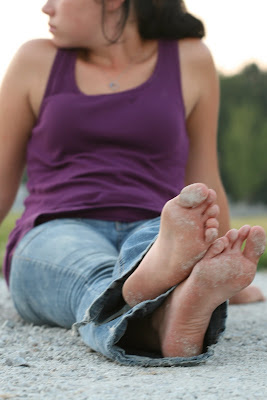 How much is too much?

It's something I've been pondering for the past few days. I've been looking back through BY THE PALE MOONLIGHT, trying to decide how best to tackle revisions. (Yes, I'm back on the BTPM train.) One stumbling block I'm having is when I reach a certain scene between members of the opposite sex.. a scene of the horizontal variety. I'll cut to the chase and say that I have a PG rated version of this scene, and a version that's not quite so...PG. In fact, it's probably the steamiest sex scene I've written to date--and that goes for my adult novels as well. I actually sent it to a friend and received a few "OMG's" in return. Yeah, I went there...and promptly reined it in with the PG version that currently resides in the manuscript.

The question I'm now asking myself is whether or not I should say to hell with it all and put the scene back in?

I'll give you a little background on the scene itself. I wrote this scene with an agenda. (Heck, don't we all do these things with a bit of an agenda on our minds? Even saying we don't have an agenda is writing with an agenda, if you ask me. So I'm not going to say I didn't have one, because that would be a big old fat lie. So yeah, I had an agenda, K?)

I wrote this scene to illustrate the point that sex should be about more than just the physical. Should be, though that isn't always necessarily the case.

I hope some of you at least agree with what I was trying to accomplish, though I certainly respect anyone who would feel it's a shoddy excuse for a sex scene. In fact, it's those voices in the back of my head that were the cause of my yanking it out of the book to begin with. More pointedly, I shared it with a friend who blew a gasket at the idea I would write such a scene...and for children no less. (!!!!) She felt, and expressed her adamant belief, that to write such a scene is to condone sex among teenagers.

Okay. This is when my eyes are going to do a little workout.

Let's all at least agree on this:

Whether or not you agree with the idea of putting sex in young adult novels... whether or not you want your children/siblings/friends, etc. to be exposed to sex, the truth of the matter is that teenagers are having sex. If they're not actually having it, they want to have it. If they don't want to have it, they're being pressured to want to want to have it. Sex is everywhere, no matter how studiously we may try to shield kids from it. Whether or not we sometimes wish we could put "sexual blinders" on them until they're of age and mature enough to handle the ramifications. (Uh, yeah, are any of us really ever old enough to handle the ramifications? Debatable.)

There's not a one among us who can keep their children from being exposed to sex in one fashion or another.

And in my book, it's going to be addressed in some fashion. To leave it out would, in my opinion, leave out a LARGE chunk of what it's like to be a teenager.

So we're back to the same question... How much is too much?

There are some big name authors who have tackled 'the sex.' Each in their own way. Who is right, who is wrong? IS there a right answer?

In the TWILIGHT series, Stephenie Meyers built up sexual tension between Edward and Bella for THREE novels. Then when D day arrived, she blacked out the entire scene.

John Green, in LOOKING FOR ALASKA, had one character give a lust-struck couple a lesson in oral sex.

Richelle Mead has sex in her VAMPIRE ACADEMY novels, though told from a distance and without explicit detail.

Can anyone think of a young adult novel that went there?

Please discuss. I really want to hear from all of you. Would you try to keep your kids from reading books that involve sex? How much is too much for you?