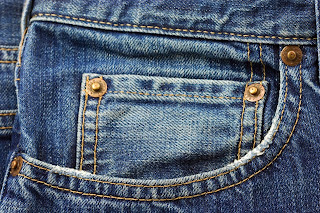 In the novel, Body of Lies, by David Ignatius, the CIA gives a body an entirely new identity. The process involved the typical things associated with new identities: an address and work place, telephone and cable bills, even a girlfriend. They dressed him in the right clothing, making sure to scuff the shoes and break them in. The meticulous spooks went so far as to create “pocket litter” for their man - populating his pockets with various and sundry things that an ordinary person might carry. His pockets had dry-cleaning slips, phone numbers, receipts, maybe a subway ticket — I don’t remember the exact details of what they stuffed in his pockets — but the brilliance of doing it has stuck with me.

The point of the “pocket litter” was to make their man completely believable. This was a man who not only existed, but lived life on many levels of ordinary. He drank coffee, picked up his shirts from the cleaners, attended the symphony, called his girlfriend on his cell phone, and so on.

I’m not the CIA, and I’ll wager you aren’t either, but we’re sort of in the same business at times: creating believable identities. This idea hit home a few days ago as I wrote a scene in which my hero places the contents of his pockets on a table. It stumped me, I confess. What does my hero, Nathan Rivers, carry in his pockets? I played it safe and only mentioned his keys and wallet, but it bothered me that I didn’t know what else he had his pockets.

A minor thing, right? Who cares what he has in his right front pocket or even what he carries in his wallet? In the big picture, the grand scheme, it’s trivia, and might even bore readers to death if I were to inventory his pocket litter. (I’m not going to do that, so breath easy.) Still, it bothers me that I don’t know what’s in his pockets because it means there are areas of his development I haven’t considered.

Think about it this way: we all carry stuff with us. Ladies, you carry a bag most likely. Some of us carry huge bags with everything but the kitchen sink in them. Some of us carry bags so small they’re more like a wallet-on-a-string. Men, you most likely have a wallet, although some men, like my father, never carry one. He hates stuff in his pockets; his money is wrapped around his driver’s license and he has two keys. If you were to look in my mother’s wallet, you’d find pictures of grandkids, an ancient I.D. card from a university, paint swatches, coupons, and business cards. See where I’m going with this? What we carry is an intimate look at who we are. It’s stuff we keep closest to us and, for whatever reason, we’ve attached importance to it.

Not knowing what your characters have in their pockets and purses isn’t a big deal. In fact, it might be kind of silly. But on a deeper level, knowing what they carry might tell you what’s important to them. So here’s a challenge if you’re stuck one day: empty your hero’s pockets and see what he holds close. Dump out your heroine’s purse and find out why she thinks she needs All That Stuff.

If you're in the mood for sharing, give us three things you found and why they're important. I'm still thinking about Nathan's pockets, but I'll share when I figure it out.
Posted by Susan Montgomery at 3/04/2011 12:47:00 AM