Sweetheart Mine, The World is Weary

I've been thinking about past generations today. My grandmother has been ill this year, and it really makes me think about all the family knowledge and experience and memory that lies with the oldest generation of our direct family line, and the fact that much of that will be lost one day in the not-distant-enough future. In honour of that sober fact, I'm revisiting/ revising an earlier post of my own, on the genesis of my war novel BETWEEN THE LINES.
My grandmother is my strongest connection to my family's history, and through her, more than a decade ago, I came across the inspiration for my World War I novel-in-progress- a battered old leather diary dating back to 1916, which began like this:
Sweetheart mine, the world is weary
When you yet are far away.
Days seem long, my heart seems dreary
When your face I cannot see.
These words, written nearly a century ago, were inscribed by my grandmother's aunt Vena, and addressed to the love of her life, one Thomas James Lockyer. 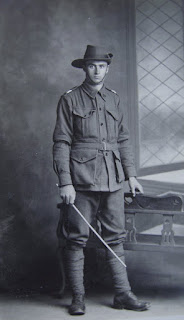 Thomas James Lockyer in his AIF uniform in 1916
(Click on the image to enlarge)
Tom was twenty years of age when he signed up to go to war in 1916. He was a miner, prospecting around the Glen Innes area of New South Wales where my family is from, and from his diary we know that most of his days revolved around work, food and sleep- and Vena, who he saw almost every day. According to his records, he was an orphan, and though he had a two siblings and a stepsister, in Vena's family- my family- he found a second home. The young lovers were engaged to be married, and when Tom went away to war, Vena's poem went with him, a heartfelt, handwritten reminder of her love. The poem goes on:

Stars will gleam again the brighter
Suns will shine with warmer glow
This fond heart will beat the higher
When you're nearer, do you know?
Do you know how much I love you?
Would you care how sweet you be?
But the angels high above you
Know how dear you are to me.
By the time Tom landed in France with the 3rd Battalion in the latter half of 1916, Australian soldiers had fought their way through the disastrous Gallipoli campaign, dying in scores on the Turkish beaches, no longer thinking war was the boy's own adventure it had seemed back in 1914. By the winter of 1916, the same soldiers were pushing their way through muddy trenches on the Western Front, gathering a reputation for bravery and sheer stubbornness that was unmatched by many others.

Tom marched straight into the infamous fighting at Ypres, where in 1917 this iconic photograph was taken showing the incredible destructive power of war: 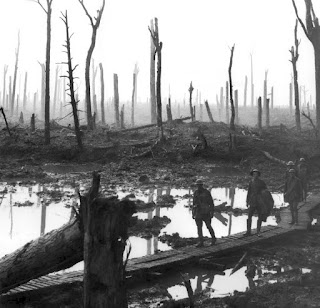 Even today, the name of Ypres and the Somme, where Tom went next, are seared upon the national memory in Australia. Nearly one hundred years later, we still care passionately about the men who fought and fell there. There's no better proof of that than the huge interest generated by the recent discovery of previously unseen glass negatives from Vignacourt in France, which depicted Australian soldiers relaxing during time off from 1916 to 1918. You can view those images here, on the The Lost Diggers Facebook page where more than 7000 people are working together to try to put names to those pictures- to bring those boys back. 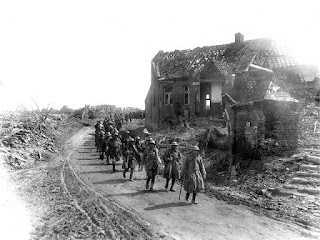 Tom's diary showed little sign of the horrors he was seeing. In fact, his style barely changed from before the war to during. Each day, he recorded that he got up, ate breakfast, and went to work. His words show that he was a simple kind of guy, but it's that poem I keep coming back to, over and over again.

Tho' your beauty time may sever,
When you're feeble, old and grey,
Still to me you'll be as ever
Precious as you are today.
Vena might have written it, but Thomas kept it with him, day in and day out. The Somme mud smudged on the pages is testament to that. Did he think of her often? Did he read and re-read it? Or did he keep it close to his heart, but ever closed, not willing to let his old life and his new reality collide?

On 4th of May, 1917, Tom was killed by a falling shell at Maricourt Wood, near Vaulx-Vraucourt in France during the Second Battle of Bullecourt. His battalion commander's unit diary records:

At 0430 enemy attacked on extreme RIGHT and LEFT of my Battalion trench. He advanced up old communication trenches to within 30-40 yards and commenced throwing stick bombs. The fight lasted half an hour.

The fighting continued all day and well into the night, with shelling, machine guns and close combat all underway, until the Australians ran out of ammunition and had to retreat a short distance. By midnight, the situation was described as "normal", but the later dissecting of the action revealed that a number of the 56 infantry soldiers killed in the fighting, perhaps including Tom, had been killed by friendly fire.

On 4th, our "S.O.S" signals were not answered. Heavies, 4.5" Howitzers, and 18 Pounders at different times dropped short in and behind our trench; on one occasion our Field Artillery placed a barrage on my line. A number of casualties were traced to our own shells. One of the shells burst in our trench and killed four men. 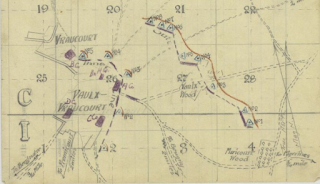 The 3rd Battalion unit diary sketch of the battle in which Tom was killed- Maricourt Wood is at the bottom right.
No matter which side of the line the shell came from that killed Tom, just like that, in a hail of shattered metal, the lifetime he and Vena thought they would have together was gone.

Vena lived into old age, and never married. The man she lost at just twenty years of age was the only love of her life, taken cruelly from her by the machine of war, too young. She grew feeble, old and grey, but like so many of his generation, age did not weary Tom. Still, though, he remained precious to Vena forever. 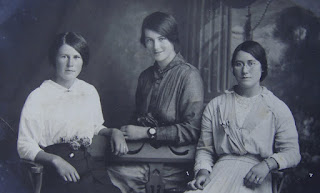 Vena (left), her sister Ada and their cousin Violet
These are the ripples that flow down to me through my grandmother and my mother. Like everyone else in my family, I knew about tragic Aunt Vena and her lost love. Not as many have read and considered Tom's diary. 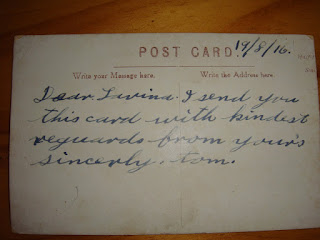 Nobody, as far as I know, has ever thought to read between the lines of Thomas's life and wonder what I have- what was he thinking, what was he feeling, at every step of his journey toward his untimely death? What went through his head as he ate his breakfast every day? What did he really think of the war?

Most of all, and this is the real inspiration for BETWEEN THE LINES- I wonder what would have happened if Tom Lockyer had not been killed at Maricourt. What if he had survived his ordeal and made it home to marry Vena? What, then, would her life have been like? What about his?

This is where the broad silences of the First World War have become so apparent to me. We feel the losses still, and keenly. But what happened when these men came home was something people kept behind closed doors. Many were fine, I'm sure. But just how many were crippled by the shock of the traumas they had seen? How many descended into alcoholism and mental illness? How many individuals combusted slowly inside, and how many families were utterly destroyed by the shattering after-effects of war? Would Vena and Tom have been happy together? Or would the happy life they'd hoped for have turned out to be an unattainable dream?

The scariest thing of all is knowing that those same families, the men who had returned, watched their sons march away to World War II only twenty years later. That, as far as I'm concerned, had to be the cruelest blow of all.

I went to my family's old dairy farm in the New South Wales highlands about six years ago on a little pilgrimage. The family farmhouse is long gone, which of course is no obstacle to an intrepid archaeologist. I was able to locate the remains in a paddock, and stood looking out over the rolling green dairy country from the porch on which Tom and Vena had sat in 1916, as recorded in his diary. In the little cemetery directly opposite the old house are the graves of a number of family members and neighbours. Some are just markers over empty ground, representing other young men killed in the First and Second World Wars. 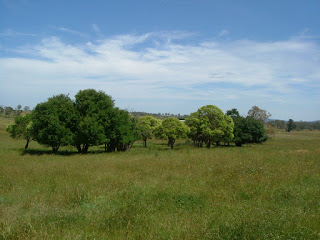 A view of the family farm at Red Range
Tom is buried at Maricourt with sixteen other Australians, and a memorial to him exists at Villers-Bretonneux, where over 10,000 Australian soldiers are remembered. In the end, though, his memory is carried on by individuals like me. 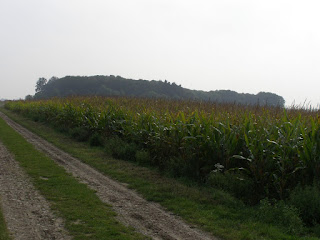 Tom's final resting place at Maricourt Wood is beneath that stand of trees
(Photo courtesy M. Smythe)
Bill, Len, and my own Tom are my way of finding out what did lie in the hearts and minds of the men who died in the First World War. Through them, I'm learning what life was like in the aftermath, too. Through them, I'm remembering Thomas Lockyer and countless others who lost their lives. Through Kit and Jared, I'm always thinking about those who were left behind- those who passed their enduring love down through the generations, to me.

I'll never make sense of war, but I'll remember Thomas Lockyer and all those who died alongside him. And when she's old enough, I'll pass the torch to my daughter, that she can carry his name on through time the same way.

It's not the fighting we remember. It's that enduring love, evermore- a reminder of what it means to be family, and what it means to lose the ones you care the most about. In war or outside it, these loves and losses are the things that define us.
Posted by Claire G at 3/17/2011 04:19:00 AM