A sense of place

I've just finished reading a great Australian novel, Bereft, by 2011 Miles Franklin Award nominee Chris Womersley- who, incidentally, will be stopping by this blog next week for an interview. We'll also be giving away a copy of his book. We can't wait!

Bereft, set in the fictional Australian town of Flint, New South Wales, post-First World War, has received critical acclaim, and one of the most praised elements of the story has been the sense of place; the presence of the Australian landscape as almost a character in its own right. You can get a small sense of that from this passage:

In the late afternoon, when the sear of the sun had lessened, he stumbled on a circular grass clearing. He hovered for a minute in the comforting shade of the trees around the clearing, but then crept into the sunlight. After all, it was not France; there were no snipers here. Even so, he dug his hand into his tunic to touch his revolver as if it were a crucifix that, through his caresses, might alert God to his anxieties. The grass was as high as his knees and long sheaves of it bent and hissed in the wind. He stared up at the blue sky. Crows and other birds, those fortunate creatures unburdened by gravity, drifted overhead, specks against the blue wash of sky.
Chris Womersley's Bereft (Scribe Publications, 2010), page 38
There's a sense in Chris's writing that "place" has many layers- the past and the present, with the characters' memories of other places, times and events also very much in play. This is, to my mind, both great writing, and a very Australian view of the world. 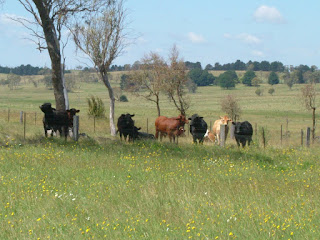 Look what I found! This is the view from the porch where Tom and Vena sat in 1916 before saying farewell- a quiet place that has seen decades of happiness and sadness, success and failure
At the recent writers festival I attended, there was a discussion about a "school" of other Australian writers- Randolph Stow, Tim Winton as examples- who have pioneered this approach. These authors have been major influences on me, and I use landscape in my writing in much the same way. For me, the Australian country is a living, breathing thing. I've always felt a connection to landscapes, but the places in my story really came to life for me as an archaeologist working with Aboriginal people, whose connection to country is on a far deeper level.

From a true Australian classic:

The trees above the Hand Cave were sheoaks, and sighed continually in the breeze. Closing his eyes, the boy imagined a grey moor, where no foot of man or sheep had ever trodden. The sound of the sheoaks was a sighing mixed with a razor-sharp whistling. It was the speaking voice of utter desolation.

They stopped at the open front of the cave, below the keening trees.

"Are we there?" asked Patrick.

They were standing in the rust-coloured rock shelter, curiously fretted by water into little galleries.

The walls of the cave were covered with hands, silhouettes of rock-coloured hands on a background of clay.

"Whose hands?" said the boy.

"Are they dead?" said the boy.

"Look, Rob," said his mother, taking his hand and fitting it over one of the prints on the wall. "It's a little boy's hand."

The sheoaks sighed overhead. It was the loneliest place that had yet been found in the world.
Randolph Stow's The Merry-Go-Round in the Sea (Penguin Books, 1965), page 55

Landscape in the hands of these authors has a personality of its own, and it's often that uniquely Australian mix of desolate and alive. The earth is all-powerful, and it can heal and destroy in equal measures. They call this the Lucky Country, and for so many it is- but for so many others, it has been a constant battle to survive. I've invoked all of those qualities in my own writing- for the Cutler family, the land, beset by drought before the First World War, is their making and their unmaking. But in the end, the land is also what rebuilds them. 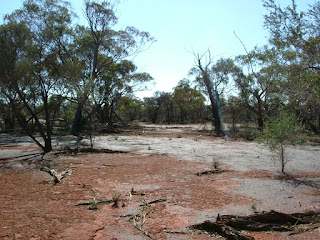 A desolate view, and yet a vibrantly alive place, full of whirring insects and wrapped in warm sun, with the lemon-scent of fallen eucalyptus leaves rising up, the only sound your own footsteps and your breath, in and out.
I'm sure that people around the world view their places with at least some of the same feelings, but it's only recently hit me that the distinctiveness of the Australian relationship with country is one of the greatest parts of our literary tradition, and yet one of the greatest obstacles that prevents some of our finest writers from gaining an overseas following. They're able to conjure the landscape and the sense of place perfectly, but it doesn't necessarily mean the same thing to an overseas reader. There's an important understanding that comes from being in this country, from feeling those connections yourself, that is missing from the narrative context.

In illustration, I'll give an (imaginary) dollar to any non-Australian who understands more than half of what's going on in the next passage:

Summer is on the land like a fever. Pink zink plastered on him, Quick sleeps the day away beneath the tarp on the back of his truck. He misses his dog. Now and again he'll spend a morning burning rooticks out of his flesh with a red-hot piece of fencing wire, then lapse back into the stupor of a western. And at night he drives to water and shoots. The bed of the truck becomes varnished with blood until the weekend when he goes to town to scrub out, cash in and sleep up. Saturday nights he sees Lucy Wentworth, or various moonstruck parts of her, in the cab of the truck, parked up some dwindling road behind a decrepit grove of salmon gums.

Tim Winton's Cloudstreet (Penguin Books, 1991), page 204
But that in itself is what fiction is all about- conveying that sense of belonging; letting the reader live vicariously through the characters. Done well enough, it strikes me that anyone in the world should be able to pick up a good book and settle into that place as if they were a local. Perhaps it's simply the case that local writers in Australia appeal most to local readers, and that's more than enough without needing to chase world domination. 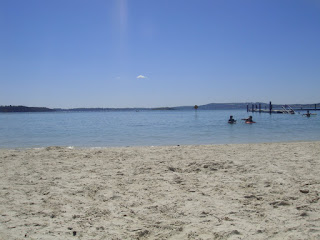 A hot, lazy day at a regional Australian beach
What do you reckon? Is setting important in your own story? Do you feel a strong sense of place in your own life? And is it easy enough for you to slip into other cultures and other places, or does too much local detail put you off?

And has anyone from outside this island-continent figured out that Tim Winton passage yet? ;)